If you never met the late Fred Alley it might be difficult to understand the love and veneration with which others speak of him, but it’s hard to overstate the role he played in creating a theater icon and inspiring those whose paths he crossed.

In many ways, Alley was the soul of American Folklore Theatre (AFT). In the early days, he dashed around Door County tacking up flyers, sold tickets before the show, and once insisted the show could go on by lantern light when the power went off. One blustery night when the cast and crew had dined backstage on chili, Alley served the leftovers to the crowd waiting in line, ladling it out into little paper cups. 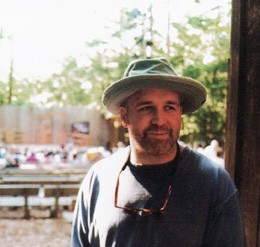 Fred Alley, who died in May of 2001 at just 38, was in many ways the soul of American Folklore Theatre.

Ten years ago this past spring, the soul of AFT left us. On May 1, 2001, Alley died of a heart attack while jogging near his farm in Baileys Harbor at age 38, just days before he and James Valcq were to go to New York to receive the Richard Rodgers Award for The Spitfire Grill, a play they co-wrote. The award included $100,000 for an off-Broadway production that fall.

Sadly, while Alley saw the show’s premiere in New Jersey and the glowing reviews it received in the New York Times and Variety, he never saw it open in New York.

On Friday, Sept. 30, AFT celebrates Alley’s lasting impact with a tribute, “The Limitless Legacy of Fred Alley,” as it kicks off the fall run of The Spitfire Grill at the Door Community Auditorium.

The night launches two weeks of performances honoring the legacy of the man who loved interacting with people, especially kids, and left them feeling that they’d made a new best friend – a legacy that helped to forge the image of AFT that continues today.

Destined for the Theater

Fred Alley began singing into a hairbrush “microphone” in front of the bathroom mirror as a tot, while his sister and brothers pounded on the door. He starred in musicals in elementary school and earned money for baseball cards singing at funerals.

He felt college would stifle his creative spirit (though he did eventually graduate from UW – Madison, where he majored in writing), so he left home at 18 to seek his fortune with a theatrical troupe in Appalachia. His early career included acting in The Glass Menagerie for three people in a mountain snowstorm, dressing as Edvard Grieg to sing Norwegian Christmas carols in a shopping mall, singing on Irish radio, acting in street theater in London, reading his poetry in coffee bars in Amsterdam’s red light district, where he worked as a missionary and bar bouncer, and, with Doc Heide, singing at a sheep’s birthday party in Baileys Harbor for $25.

Alley joined AFT’s predecessor, the Heritage Ensemble, in 1982 at age 19. With Heide, he became co-founder/producer of AFT in 1990 and was soon named executive producer, the company’s first year-round employee. By 1998, he was artist in residence. He founded the Town Hall Series of fall shows and was the impetus for establishing Door Shakespeare.

Over the years Alley wrote and co-wrote more than two-dozen shows while tirelessly acting, producing and directing. It was his connection with the Milwaukee Repertory Theatre that brought a steady stream of AFT creations to its stages.

Pinpointing Alley’s most memorable role is a tough assignment –Leo Dewarzeger in Belgians and Moonlight in Lumberjacks might give Lloyd a run for his money in Guys on Ice – but it was clear Alley loved to be on stage.

Sometimes he could scarcely believe the good fortune he had to be on stage with “other guys who never quit performing high school musicals – Doug Mancheski, Lee Becker and Jimmy Kaplan.”

“Two guys in snowmobile suits sitting in a fishing shanty,” he said. “Who thought it would be such a big deal?” 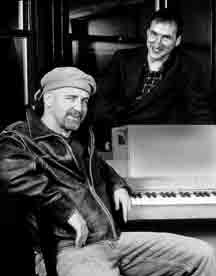 And he loved to make fun of himself. “The skills I have developed in my years with AFT are not much use in the work world,” he once told a reviewer. “I can strum guitar while dancing soft shoe. I can play harmonica through my nose, and dress in a fat suit and eat dozens of circus peanuts while singing and doing high kicks on a wobbly chair. These are all admirable abilities – they just don’t translate well into other fields.”

Fortunately, after a year or so with AFT, there was never a need to seek employment elsewhere. Alley was where he belonged, doing what he was meant to do. “In the end,” he said, “it’s all about bringing light into the world.”

Alley often shrugged off his accomplishments. When he recorded his first album, Beneath the Northern Sky, in 1987, he was confident that, at age 24, he had created his defining work.

On April 4, 1995, Alley sent a letter to his folks, thanking them for their support and encouragement. “Perhaps I will accomplish great things,” he wrote. “Perhaps I have already known my greatest moments. Whichever.”

That was before Bone Dance, Our Night in Frog Station and Lumberjacks, before Guys on Ice and The Bachelors, before The Spitfire Grill. Before he crafted a legacy that is, indeed, limitless.

Alley’s favorite quote from Émile Zola was on the cover of the program for his memorial service – “If you ask me what I came into this life to do, I will tell you: I came to live out loud.”

In 38 all-too-short years, Fred Alley did.