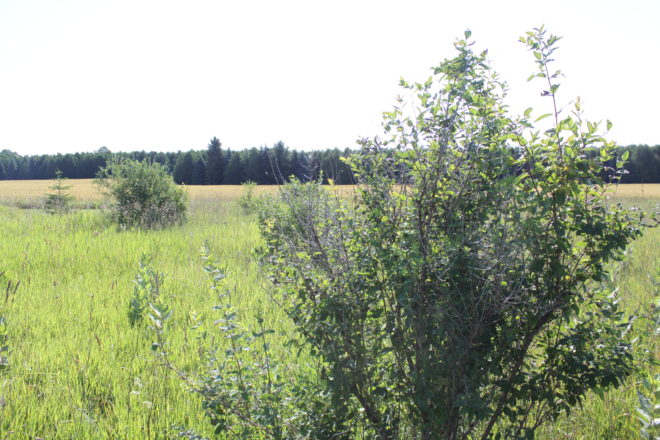 The four acres surrounding my family’s house in the Town of Gibraltar is riddled with big shrubs that seem to grow bigger. Kari Hagenow, coordinator for the Door County Invasive Species Team (DCIST), identified them all as invasive honeysuckle and told me the best way to eradicate them during a rainy walk around the property, a free service provided through a coalition of various natural resources groups in the county.

“We see a lot of honeysuckle that’s just massive,” said Hagenow. “The native one will never get really big. The real way to tell them apart with certainty, if you took small clippers and go on one of these woody stems, clip one of those woody stems, the non-native species will be hollow on the inside.”

Hagenow visits 20 to 30 properties throughout the county each year to identify invasive species, but is happy to do more.

“It’s a fun job for me. I get to see all kinds of places in the county,” said Hagenow.

Hagenow works for the Nature Conservancy, but her position and the property visits are made possible through a coalition of the county’s Soil and Water Conservation Department, Department of Natural Resources, U.S. Fish and Wildlife Service and nonprofit organizations.

“I’m writing grants all the time for funding because that’s what funds my position,” said Hagenow. “It’s all grant funded, there’s very little of the county funds that go into that and any that does is really just their staff time.”

There is a little bit of spotted knapweed to go along with the honeysuckle on my property, but Hagenow said it is nothing some consistent mowing can’t handle.

Walking around the property, Hagenow would stop and run her fingertips across a leaf or break a stem and look at what’s inside, unearthing tiny clues as to the otherwise invisible differences between a native and invasive.

One of those invasives is the Japanese barberry.

“It’s very commonly planted ornamental plant,” said Hagenow. “That is one we see really often in the most random places.”

Plum Island is plagued with the beautiful but invasive plant. U.S. Fish and Wildlife Ranger Dustan Hoffman said the first settlers of Plum Island and subsequent residents at the Coast Guard station planted the barberry without knowing its invasive nature.

“Barberry is also linked to higher incidence of Lyme’s-carrying ticks,” said Hagenow. “At Plum that’s one of the things we’ve talked about because Plum has a lot of deer ticks already and then you’ve got the barberry.”

Hagenow sometimes finds herself in the awkward position of telling a landowner their property is covered in invasive species with few options outside of a complete landscaping plan to get rid of them. Still, my sister touched on the whole point of these visits, education, when she said, “Even if you don’t do anything about them right now, at least you know what you have.”

Contact Kari Hagenow to set up your invasive species property visit at [email protected] or 920.746.5955.