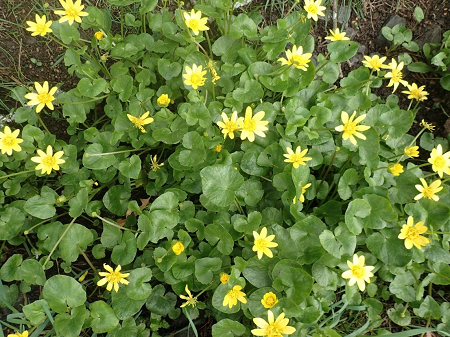 Lesser celandine (Ranunculus ficaria), also known as fig buttercup, is a low-growing plant native to Europe, North Africa, western Asia and Siberia. It was brought to the United States as an ornamental plant and quickly escaped the confines of gardens and yards.

Lesser celandine prefers moist forests and riparian areas like riverbanks, but it is also tolerant of drier, sunnier sites. This early detection species has not yet been found in our area of Wisconsin, but has been found in urban areas in the southeastern part of the state including Dane, Milwaukee, Racine and Walworth counties.  Once established, this plant can quickly form dense colonies that overpower the native ground layer plants and tree seedlings.  Erosion and runoff can also occur in areas of large infestations because bare ground is often exposed early in the summer after the plants die back.

Lesser celandine is a spring ephemeral – emerging in the early spring, quickly developing flowers, and dying back by early summer. During this time period the plant produces round, white bulbils that drop off the plant and are spread by water, wildlife or within soil. Not only can each bulbil sprout and give rise to a new plant, but lesser celandine also spreads by tuber and seed.

If the bulbils don’t give it away, lesser celandine also has thick glossy leaves and small, but showy, yellow flowers that help identify it. It does resemble our native marsh marigold, which flowers at the same time. Marsh marigold contains 5-9 yellow “petals” (actually sepals), while lesser celandine often has eight-petaled flowers. Marsh marigold also does not produce tubers or bulbils.
Individual plants of lesser celandine can be hand-dug, being careful to remove all bulbils or tubers. Digging is more difficult on larger populations because of the soil disturbance and abundance of small tubers. If you find this plant, help is available for its control through the Wisconsin Department of Natural Resources and the Door County Invasive Species Team.

Lesser celandine is listed as a prohibited species in Wisconsin’s Invasive Species rule (Chapter NR-40). Prohibited status means the plant is not yet widely found in the state, but poses great environmental and/or economic impacts should it become established. Prohibited plants cannot be transported, transferred, possessed or introduced without a permit.

If found, report the occurrence of lesser celandine to the Wisconsin DNR ([email protected]) or DCIST ASAP.  Photographs and voucher specimens are especially helpful.