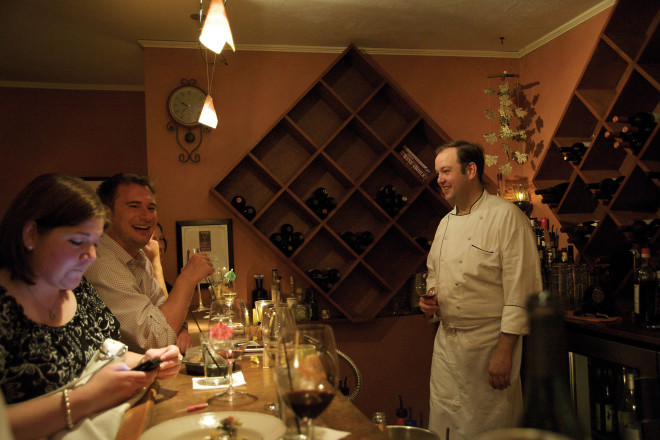 What would you do with your last day on Earth? A tough question to answer but Barbara Luhring knows; she would spend it at T. Ashwell’s, eating at the bar and sipping her favorite cocktail made for her by her favorite bartender, Zack Lozoff. If that isn’t a restaurant recommendation, I don’t know what is. 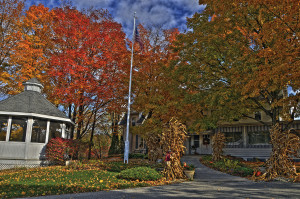 After graduating high school, Tom went on to college only to find that his focus was elsewhere. Again, Tom’s mother brought up his love of cooking and encouraged him to try culinary school. Tom went to Kendall College, a culinary arts facility in the heart of downtown Chicago and graduated in 1991. Tom bounced around Chicago for a bit, working in restaurants and studying different techniques including the classic French cuisine at La Vichyssois in Lakemoor, Illinois.

Tom’s family has been spending summers in Door County since Tom was a baby and, in 1994, Tom decided that he would try his hand at restaurants in this area. He moved into his family’s cabin and began work with the Daubners at the Sister Bay Café. Tom enjoyed the hands-on aspect, a smaller scale restaurant and the menu development, but soon he began to scout for a place to call his own.

After looking at several locations Tom finally walked into the Griffin Inn in Ellison Bay and knew that he had found a home. “It was a little bigger than I needed at the time,” Tom explains but over the years he has inhabited more and more of the space. When talking with Tom, he seems genuinely interested in the history of the building – in fact, on the walls throughout the restaurant he has framed photographs of its different incarnations. The building itself has been an Ellison Bay landmark for many years. It was built as a private residence in 1910 and, after adding a large addition, opened as the Ellison Bay Lodge in 1921. It operated as a lodge under the same family until the late 1960s. Tom purchased it as the Griffin Inn in 1998, remodeled it to function as a restaurant, and opened for his first season in 1999.

Tom brings all of his experience literally to the table with his ever-changing menu. Although there are established favorites, such as the Thai quail and his duet of duck, Tom loves to experiment with different dishes. Tom tells me that he and his Sous Chef, Mic Werth, like to peruse interesting and different cookbooks both old and new for fresh inspiration in food. He is happy to point out that the conversations he has with staff and friends are what promote the ideas for new dishes. “I have to be realistic about saving favorites,” Tom says, “but I love to come up with new ideas to the keep the menu fresh.” It is easy to see why Ashwell’s has such a devoted following when I hear Tom explain that he will put items 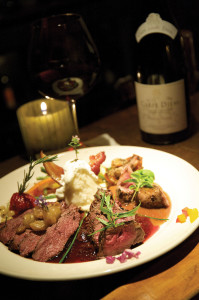 back on the menu when loyal customers call and ask for their favorites while they are visiting.

One of the first things you notice about the Ashwell’s menu is the large number of appetizers. “Tapas” has been a huge trend in the food world for the past few years and Tom seemed to be ahead of the curve. “I’ve been serving small plates since we opened our doors,” Tom says and their very popular Thursday night appetizer menu has been bringing customers in for several years. Tom also explains that he likes to maintain a balance in his menu with dishes that will have something for everyone including a vegetarian tasting that is a staple on the menu but offers varying samples of vegetarian fare. There are the obvious beef and poultry offerings, too, but Tom likes to push the envelope with less conventional meat choices such as locally-farmed ostrich or quail.

Tom also incorporates themes into his menu during the winters when there is a little more time for experimenting. The Mediterranean Nights, for example, are quickly becoming a tradition during our long winter. Tom drapes the bar and restaurant with Persian-inspired fabrics and serves a Mediterranean buffet right out of the kitchen. Diners enjoy a candlelit dinner with actual belly dancers performing shows throughout the evening.

Of course, no meal tastes as good without a fabulous glass of wine or a cocktail and, whichever you may prefer, Ashwell’s has you covered. The bar area in the restaurant is a comfortable, romantic venue. With a recent redecorating to incorporate more dining tables, the bar offers a wonderful place to enjoy the frequent live piano music and sample some small plates.

If you are looking for what to sip with your carpaccio, simply turn to the man behind the bar for the answer. Zack Lozoff has been working for Tom for five seasons and has worked his way up to many titles:  house manager, wine director and head bartender adds up to quite a lot of responsibility, but after talking with Zack over coffee, I can tell you he is up to the challenge. Zack enjoys his customers and helping to make their dining experience a memorable one. “I love when I see that I helped to make the right choice for someone,” Zack says. “Then I can go home happy.” Zack works to create and expand his wine list but sheepishly admits, “I mostly put on what I like.” There are, of course, the varietals we all know and love but Zack will add something different to help expand the horizons of the average wine drinker. He is confident, saying, “If you can tell me two things that you like in a wine, I can pick out something you will definitely enjoy.” The same goes for drinks as he is credited with coming up with various “signature cocktails” for customers. Zack is a delightful conversationalist and a wonderful front-of the-house personality for Ashwell’s.

Working in restaurants in Door County is almost a rite of passage for locals and visiting students but the atmosphere at Ashwell’s is a different animal. “I know it sounds cliché but we really are like a family,” Zack laughs. Indeed there is relatively low staff turnover, especially considering the tra 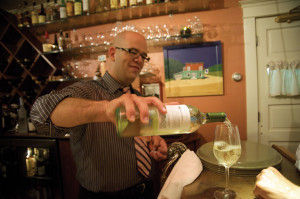 nsient nature of this business. Several “family members” have been there for five or more seasons and one gal has been with Tom for all 10 years. There is an ease to the mood at Ashwell’s that further enhances your dining experience and lends itself to savoring both food and drink. Tom makes a habit of popping out to say hello to returning customers and start relationships with new diners.

“Did you know that you are on my Facebook Quiz?” Barbara Luhring asked when she bumped into me and Zack having coffee. “The one about what you would do if it were your last day on Earth?” she continued. “I saw that!” Zack smiled. When we explained the reason for our interview, Barb laughed, “I mean it, he’s the best!” After verifying that no money had exchanged hands for that endorsement, I realized how much people enjoy eating and drinking with family, especially the T. Ashwell’s family.