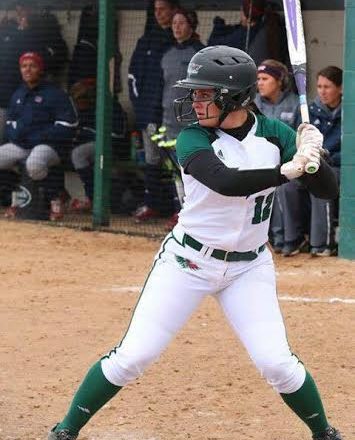 Acacia Tupa, 2015 graduate of Southern Door High School, has led the Division 1 University of Wisconsin – Green Bay Phoenix softball team through a tough season. Her name sits comfortably at the top of the statistics and her success has led her to a nomination for Newcomer of the Year at the university.

“It’s been a pretty good year and we’ve had a lot of ups and downs,” said Tupa. The team is 19-30 with three games remaining before the Horizon League Conference Championships.

Being new to both collegiate softball and the rest of college life, the freshman has managed the adjustment with ease.

“Adjusting to the school part of it is the biggest change,” said Tupa. “Softball wise, the pitchers move the ball a lot better and the strike zone is a little bit different.”

Compared to high school, Tupa said umpires give more room to the left and right of the strike zone, but she has still managed to hit five home runs this season, including one in the team’s April 30 win over Northern Kentucky University in Highland Heights, Ky.

“I actually have adjusted to the outside pitch a lot better and I’ve hit to left field a lot better,” said Tupa. “I’m still continuing to work on the outfield and being cleaner with getting in position because the girls are much faster.”

The Phoenix will play the final three games of their season at Cleveland State on May 6 and 7 before the conference championships.