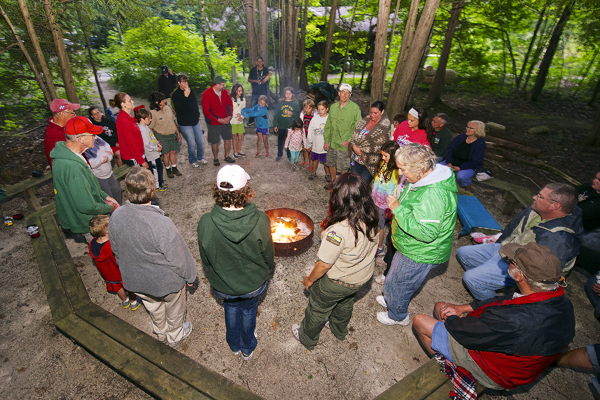 A naturalist leads a program at Peninsula State Park. Friends groups help fund part-time naturalists in many parks, provide funding for upgrades at parks, and fill many other needs. Photo by Len Villano.

Every year, thousands of volunteers across the state donate countless hours of their time for the benefit of Wisconsin state parks, forests, trails and recreation areas. In many cases, these individuals are supporting the work of a local Friends organization – a group of volunteers that supports the mission and activities of a particular natural area.

There are more than 80 such groups in Wisconsin whose membership serves a variety of capacities: as campground, visitor center and nature center hosts; raising money to fund equipment, displays, signs, shelters and kiosks; organizing cleanups and trail work days; organizing special events that including candlelight nights and community campfires; helping with concessions; and assisting with construction of trails, shelters, cabins and more.

Friends groups have been an important part of Wisconsin’s recreational culture since Wisconsin Administrative Code NR 1.71 was put into place in July of 1989. That code encouraged the establishment of non-profit Friends groups to support, assist and promote Wisconsin Department of Natural Resources (DNR) properties.

Friends groups quickly formed across the state and by the mid ’90s, it became clear that a parent organization was needed to better facilitate communication and support between the various groups. In August of 1996, the Friends of Wisconsin State Parks (FWSP) was chartered with a mission to support the work of member Friends groups and other organizations to enhance, preserve, protect, restore and promote Wisconsin state parks, forests, trails and recreation areas.

In its more than 20 years, FWSP has lent support to its member Friends groups and the DNR in many ways, from technical to financial. In the early days, the nonprofit set up a statewide, affordable liability insurance plan for Friends groups, developed a webpage and interactive online events calendar, and helped establish a statewide Master Naturalist program.

“Last year we gave out in the neighborhood of 20 grants for interpretive programming,” Zager said. “A lot of these were to fund naturalists. A lot of the parks, their Friends group funds the part-time naturalists in the summertime and we give out matching grants for up to a thousand dollars per grant.”

Since 2011, FWSP has awarded 129 matching grants for naturalist programs totaling $107,060, and in 2015-16, awarded 26 $100 matching grants that, when matched by local Friends groups, amounted to $5,200 for the planting of flowers and trees at state park entrances, parking lots and other areas of the park. It has also developed a grant program to help new Friends groups with start-up costs.

For more than two decades, FWSP has maintained a strong relationship with the DNR, which has provided an employee to serve as its outreach coordinator. But this summer, the organization will embark on a new chapter when its current outreach coordinator, Patty Loosen, becomes its official executive director.

“As of July 1, we have hired Patty to be our executive director and she will no longer be with the DNR,” Zager said. “We have always been a separate entity but then we will be paying her wages 100 percent.”

The change comes as the DNR faces staffing and funding shortages, and nonprofits, corporations and volunteers are increasingly seen as the answer.

“We’ve always operated very independently and we are going to maintain a close relationship with the DNR,” Zager said. “That’s good for all of us but it will give us much more flexibility, I think, when we approach a corporation or somebody to donate money when they know that our Friends groups are who are going to be the beneficiaries at the parks.”

While Zager points out that FWSP and the Friends groups it supports rely on three types of volunteers – the hands-on helpers, the organizers and the financers – this new chapter provides an opening for another kind of volunteer.

“We are just now getting into the phase and we are being trained on what it takes to be fundraisers and we are looking for volunteers who are interested in this, who have the expertise in fundraising,” Zager said.