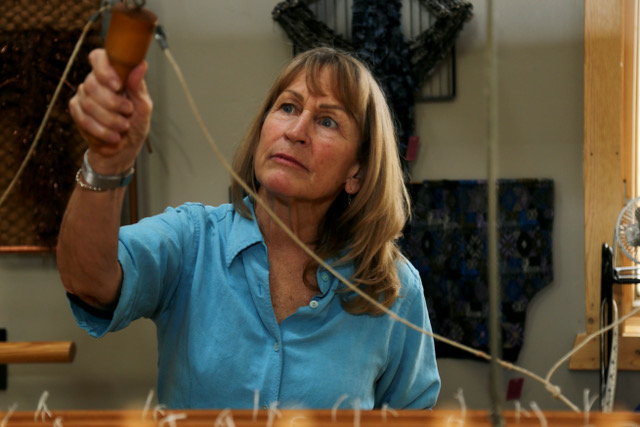 After 40 years of creating textile art, Wendy Carpenter still uses a  methodology that leads her to focus, simplify and eliminate; to make her work better and stronger; and to be inspired by nature – but in an abstract way.

“It was in the mid-70s, when weaving was just becoming an art meme instead of a craft, and it was a big thing at that time,” said Carpenter, recalling her artistic beginnings at Evergreen State College in Olympia, Washington. “Now I think weaving has become a pretty acceptable medium for the fine arts.”

After graduation, Carpenter tried her hand at a mix of practical and artistic weaving before deciding to focus on art exclusively.

“I thought I had to weave something functional to make a living, but that’s not true at all. When I talk to someone very young starting in the arts, I tell them to not sell yourself short.”

Carpenter likes to work in a series of usually three pieces, and she often starts with local landscapes for inspiration: a piece inspired by Europe Bay, for instance, but more abstract, in a borderline expressionist or impressionist style.

On her loom now is a triptych called “Bay and Bluff” that’s inspired by the local shoreline. Carpenter is currently weaving the middle panel, working off a design document that’s meticulously accurate down to the quarter-inch.

She weaves threads through holes in iron or wooden frames to create images, a process that allows her to be more sculptural than a loom would allow because she can expose the warp thread and twist threads to provide more dimension.

Although she works in a wide variety of yarns, including linen and wool, she sometimes incorporates birch bark, twigs or even copper tubing into her art. Her frames have gotten bigger, too: up to five by six feet. It’s easier to see a piece evolve on the frame, she explained, because unlike a loom, which rolls up the work as it’s completed, the entire design remains in front of her on a frame.

Clients often ask her to create something similar to what they’ve seen in her gallery or on her website, but a client’s choice of a previous design is just the starting point.

“It never ends up being a paint-by-number,” Carpenter said. “I love doing commission work; I find it to be really rewarding because when you work with clients, you learn so much about them.”

Recently the owners of a home on Sand Bay found her work online, went to the gallery and took three large tapestries with them – one of them nine feet long.

“They have a huge, high ceiling, and they said the sound is horrible. Putting a painting there would be hard, but a tapestry would fit well.”

Helen del Guidice, curator at the Miller Art Museum in Sturgeon Bay, also took notice of Carpenter’s work and included it in a show called Textile Tableau: An Exploration of Painting with Fibers.

“For Wendy’s inclusion, I saw her reinterpreting the canons of landscape painting in woven three-dimensional and mixed-media artworks, in which her background in the textile surge of the 1970s – focused on weaving and macramé – was also apparent,” del Guidice said.

Carpenter’s work mingles the traditional techniques of textiles with the iconic genre of landscape to create abstract, mixed-media and experimental landscapes. Her centerpiece in the Miller exhibit was “Waterfall,” which hung from the upper level and featured woven ropes in various shades of blue cascading off a natural wood ledge.