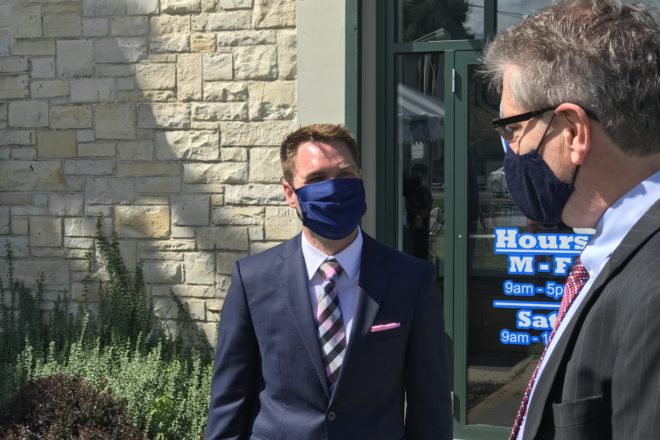 Nathan Drager had a natural-born talent for technology and computers. What he didn’t have was a college degree or formal training. That didn’t stop him from trying to break into the IT world throughout his 20s, but no company would give him a chance.

“Every year I’d get my resume doctored up and tried to get hired,” Drager said. “I was never able to get even an entry-level, help desk, tier-one [IT] job.”

He kept on with his steady, full-time employment within Sturgeon Bay as a CNC (computer numeric controlled) machinist, but he said he felt “underemployed” during that time and was always looking for additional opportunities that never came his way.

“I spent a lot of time probably annoying my bosses, asking for meetings, saying, ‘Hey, I think I can handle more responsibility,’” Drager said. “I always knew I was very good with computers, so I always wanted to do estimating or design or other [things] to help the company other than [being] a machinist on the floor.”

Had Drager been able to land an IT job or move up the ladder at an existing company, this story would likely never have been written.

“If I’d been able to get a position somewhere, I probably would not have pursued my own business,” he said.

But he did pursue his own business. Drager, 37, is the founder and owner of Quantum PC Services in Sturgeon Bay. Last year, he was the Door County Economic Development Corporation’s Entrepreneur of the Year. Last week, he received the U.S. Small Business Administration’s (SBA) first Rural Small-Business Person of the Year award for Wisconsin. Drager said he’s humbled and beyond excited to have earned this kind of business recognition so early in the game.

Eric Ness, Wisconsin district director for the SBA, presented the award – intended to recognize business growth in a rural area – in person on a sunny day beneath a canopy in front of a small gathering.

“We all know that small businesses do so much more than build our economy, though they do create two out of three net new jobs,” Ness said. “They are the fabric of our communities and give the places we live and work prosperity and character. This is even more true in smaller and rural communities.”

Drager was born in Door County but moved with his mother to Michigan’s Upper Peninsula, where he completed high school. At 20, he returned home.

His father, Thomas Drager, current president and general manager of Roen Salvage Company, also resided in Door County. Drager said he always thought it would be cool to work with his father, but he began charting his own course instead.

When he couldn’t break into IT, he started Quantum PC as a side gig in 2012, fixing consumer electronics out of his home. That side gig went well enough that Drager quit his day job in 2015 and rented a little storefront on Kentucky Street next to Poh’s Corner Pub. He was a computer-repair person: what’s known in the industry as a “break fix” shop. If a battery wouldn’t hold a charge, a screen was broken or a device wouldn’t boot up, Drager was the go-to guy.

“I moved in there, and it was really a solo venture,” he said. “I was going to fix computers on my own.”

That didn’t last long. About two months later, a college kid walked in looking for an internship. Drager hired him full time, and that college kid is now his vice president. Also short lived was the break-fix business model because they soon branched out into anything with a screen, and then all forms of technology, security systems, Wi-Fi systems, business-management servers, service plans, and email and web hosting services. He added cabling and entered the smart-home automation market, leveraging voice-activated technology.

Drager said the company’s rapid diversification enabled its growth as it began to service the unmet – and even unrecognized – needs on the peninsula, including within the hospitality industry.

“There never really was a business like that in Door County,” he said. “A lot of people outsourced to Green Bay or Appleton, and so these technicians were driving up here from the Fox Valley to support and manage businesses or install Wi-Fi systems in a hotel.”

Being able to supply those services locally also created demand.

“While there were some people who knew they had a need to have a property-wide Wi-Fi system, after we started installing those systems and marketing them, I think we found a lot of business owners who didn’t even know this type of technology existed because we’re kind of on an island up here, physically and technologically,” Drager said.

He said he never intended to be a business owner but finds he likes being in charge and making decisions. His background as an employee who always sought better opportunities shaped his management style.

He’ll lease the industrial-park building back to the current tenant for the next two years, so the move will have to wait awhile. But Drager is definitely ready for the next step.