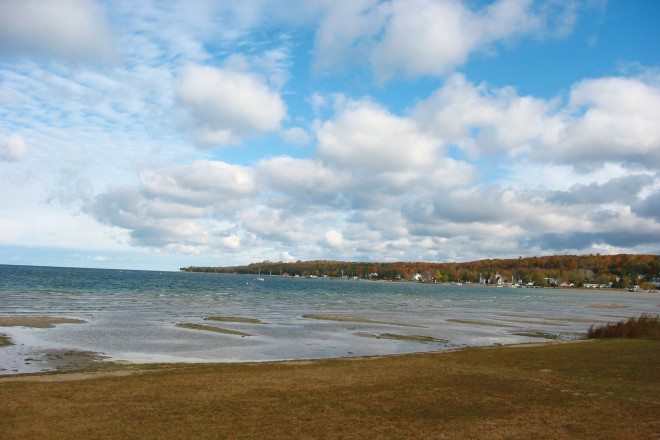 The fall wears on toward winter, and the signs of the changing season are everywhere. As the days get even shorter, the geese as well as the summertime crowds have mostly moved south. The marinas and harbors are emptier after each weekend. As the temperatures fall and the waters of Green Bay darken, sailors might just feel a bit mournful for the end of another sailing season. There is something lonely about those few boats left among the empty mooring balls bobbing in the harbors. Before long even those moorings will be lifted and stored to prevent them from being iced in. Still, every year a few boats remain right into the first snowfall. One may wonder if these last few boaters are lazy, crazy, or just simply too foolish to realize that the season really is over. As it turns out, it might not quite be over. There may be one good day left.

As any fall visitor to Door County knows, every once in a while the brisk northerly winds lie down, the clouds break, the sun shines, and the temperatures rise, if only a little. On days like these the bluffs can seem afire from the way the fall light strikes the leaves which have turned to orange and yellow. As the winds slacken, the water flattens out a bit and the whitecaps disappear. Yes, there might just be a couple sailing days left…if you’re dressed for it.

A few years ago, driving through Ephraim late in the fall, you might have noticed a lone wooden sailboat with a slightly raked mast sitting on its mooring in Eagle Harbor. On calmer days you might wonder why it lingered so late. When then north wind would come howling straight into the harbor, and the temperature would drop to freezing, she would tug at her mooring lines, and you had to wonder how they would ever get her out. At the time, Windjak belonged to Leif Erickson and his wife Jen, and for all the years they owned her, they stretched out the season as long as they could. “I would usually call Yacht Works and find out when was the last day that they were hauling boats,” said Erickson. “It usually was around the first week of November.” Good weather or bad, this would be the last sail of every year.

For the Ericksons, apart from getting in a few more days on the water, the attraction was being the only boat out there. “It was really great to feel like you had the whole bay to yourself,” he said. On one late-season sail, Windjak did encounter another boat, which was of course, unusual. The following day Leif received a phone call. As it turned out, the boat they encountered had the editor of Sailing Magazine on board. Windjak was the only other boat they had come across in their entire day of sailing; they had snapped a photo of her under sail, and offered to send it.

A certain amount of discomfort and some extra effort must be endured to squeeze in these last few days. Apart from the effort of trying to stay dry and keep warm – often a losing battle – Leif and Jen found themselves sometimes chipping ice off the decks to prevent build-up and keep themselves safe from slipping. “Ice would form about anywhere, except below the waterline,” he said. “And you really don’t want to slip and end up in the water this time of year.”

For Peder and Sarah Nelson, two other local sailors, late season ice-ups would sometimes force ingenuity…like breaking ice around the stern with a spinnaker pole in order to back out of a slip (see photo, opposite page). Nelson, owner of the sail charter service Sail Door County, and a small group of his sailing friends take pride in getting the most out of the season. They refer to themselves as FILOs, that is to say, “First In, Last Out,” named after the inventory system.

In the ‘90s it became a sort of tradition for Peder to keep Passage North in the water to sail to the Fall Fest weekend in Sister Bay, late in October. At the time, Peder was dividing his time between Door County and Chicago, and he would return for this weekend to sail to Sister Bay from Egg Harbor. A place at the dock in Sister Bay was never a problem, even during this busy weekend, as most of the other boats were already stored for the year. After the weekend was over, Peder would return to the city, leaving the boat in Sister Bay, sometimes for a few more weeks.

Peder would often return to the boat over the Thanksgiving break to sail her back from Sister Bay to Egg Harbor, and eventually to Sturgeon Bay. There she would be hauled for storage. “One year, just after Thanksgiving, Rick Langdon and I were pulling into the marina in Egg Harbor just as they were lighting the village Christmas tree,” Peder laughed. “We could hear the people singing Christmas Carols.”

Once in Sturgeon Bay, Nelson found that a few others let their boats linger late every year. Even after Thanksgiving, when you have a few sailboats together, what can you do but race? Thus, the Gobbler Cup was founded. It began as a sort of impromptu buoy race inside the Sturgeon Bay harbor. In some years, there was a foot race component, making it a sort of biathlon, which included a dash to a local pub for a rum toddy (the official beverage of the Gobbler Cup). It may be hard to imagine something more odd than a sailboat race in the midst of the Christmas shopping season, but then you might notice that one of the sailors is wearing her swimsuit outside her snowmobile suit. The race became an annual event, but lasted for only a few years in the late ‘90s.

The fall weather is too unpredictable and temperatures a little too uncomfortable for taking out charters, so Nelson sees these last days of the season as a chance to sail with friends. He recalled the pleasures of the late season sailing trips. “There is something really nice about getting decent weather on a Sunday, getting some friends together and getting the boat out to listen to the Packer game. Besides,” he says, “breaking ice is one of the most unique sensations you can have while sailing.”

There are blustery fall days when the north wind turns the water a frosted black from the froth blown off the tops of whitecaps. These are the days that make most boaters content to know they have their boat safely stored. It may be crazy for that die-hard few to wait it out to the bitter end, hauling out only just before snow blows across the blue ice. All the same, given the chance, this fall I’ll pull foulies over a couple layers of fleece and try a day on the year’s last open water.