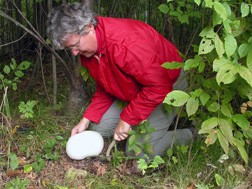 Charlotte, the mushroom expert in our family, frequently learns of some special or unusual specimens growing in the county. They could be mushrooms pushing their way up through a blacktop driveway, an unusual “fairy ring” of mushrooms, or some strange umbrella-like mushrooms growing on a bed of wood chips.

One call alerted her to three Giant Puffballs growing on someone’s front lawn, so away we went equipped with cameras and whatever else was required to study the large fungi (FUN-ji). And they were huge, the largest being 10 inches high and 14 inches across. Not having permission, we did not collect any of the puffballs for eating.

David Arora, author of the highly respected Mushrooms Demystified, wrote, “Calvatias (cal-VAY-she-ahs) are among the most prolific of living organisms. It has been calculated that an average-sized (30 cm or 12 inches) specimen of the Giant Puffball (Calvatia gigantea) contains 7,000,000,000,000 (7 trillion) spores! In these inflationary times, that may not sound like much, but consider this: if all 7 trillion spores (each one measuring 1/200 of a millimeter) were lined up in a row, they would circle the earth’s equator! If each spore produced a 30 cm offspring, the resulting puffballs would stretch from the earth to the sun and back, and if their spores were equally successful, the formidable puffball mass would weigh 800 times as much as the earth! Each spore is theoretically capable of germinating, yet very few (obviously) do. It would be interesting to know why so many don’t, or conversely, why such a surplus of spores is (needlessly?) produced.”

Arora goes on to say, “Because of its preference for open hillsides, [Giant Puffballs] can often be spotted from the road. Large specimens, in fact, have been mistaken by passersby for herds of grazing sheep! (Mushroom hunters, on the other hand, are more likely to mistake grazing sheep for Giant Puffballs.)”

Our enjoyable incident with the three Giant Puffballs brought back memories of one of my most cherished and unusual experiences I have ever had with a fungus. My favorite boyhood hiking area west of my hometown of Kewaunee took me through the hilly woods to the south of the Kewaunee River, a place I dearly missed during the years I was away at college and in the army.

I headed for “my” woods on a crisp sunny Saturday afternoon one September. A high hill with a clear scenic view toward the river became my lunch stop and helped to bring back dozens of pleasant and adventurous memories, especially of the many I had with my close friend, Tony Kotyza, when we were in high school.

All of a sudden a very strange far-away sound reached my ears, “Thump…thump…thump…thump.” The only object I could associate with the sound was a large hollow rubber ball being bounced upon a sidewalk, hardly possibly here in the middle of a woods over a mile from the nearest road. 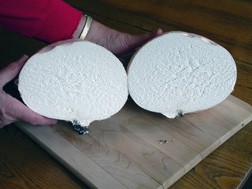 A fresh Giant Puffball cut in half shows the pure white flesh.

The mysterious beat continued and became louder and louder, somewhat like the cadence of a small bass drum. Suddenly two figures appeared over the rise of the next hill, a man and a little boy. Now I could see that the youngster was carrying something whitish under one of his arms and was giving it a good solid whack about once every four steps.

Finally they approached me, stopped for a chat, and showed me with great pride the Giant Puffball they had found along the way. This was the mysterious “drum” I had been hearing and the little boy was the drummer!

Of all the fungi in the world, few are as easy to identify and as safe to eat as this large puffball. However, I can easily visualize a careless person picking a nice solid mushroom in the small button stage, before the cap develops, assuming that it is a very young puff-ball, and eating by mistake one of the deadly Amanita mushrooms.

There are several things you can do to avoid this drastic mistake, in fact, perhaps your last mistake! Use only the large puffballs for food, those which are grapefruit size or larger. Cut through the globe-shaped fungus from top to bottom. The color of the flesh must be perfectly white in order to be edible. In fact eating a puffball that has begun to turn color and to deteriorate may make you very ill.

Secondly, this cross section will enable you to check for tiny pinholes, which will indicate the presence of small worms. They, too, are very fond of these choice morsels. The least bit of darkening indicates that the puffball is beginning to develop mature spores. This dried spore mass was used for many years by barber-surgeons as a styptic to stop bleeding. Some people in the olden days used bits of dried puffballs as tinder, while the Finns used this fungus as a cure for diarrhea in calves.

Theoretically one spore, planted by natural forces in the proper rich wet humus, can result in a tremendously large puffball. A vast series of extremely thin cobweb-like mycelia (my-SEE-lee-a), growing into the ground and consuming organic material, will develop from the single spore. This is in reality the vegetative portion of all fungi including those that are gilled, woody or otherwise. Eventually, much like a blossom on a rose bush, the proper combination of moisture, heat and other growing conditions will result in the so-called fruiting body, the mushroom or puffball itself. 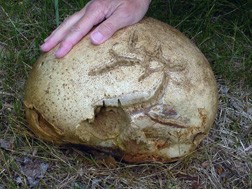 This Giant Puffball is turning brown and is too old to eat.

One old English name for the puffball was fuss ball and may have been the forerunner of the word “football.” Schoolboys were known to enjoy kicking mature fuss balls to cause them to “smoke” and to scatter the dust-like spores. By the way, inhaling a great quantity of these spores can cause a severe lung infection.

Puffballs have for centuries been known to stimulate salivary glands and excite wonder in the lucky finder. Our favorite way of eating them is to cut them into half-inch-thick slices, thoroughly coat them with a mixture of beaten egg and milk, dip in soda cracker crumbs and lightly fry in butter.

Henry David Thoreau wrote, “If a man does not keep pace with his companions, perhaps it is because he hears a different drummer. Let him step to the music which he hears, however measured or far away.” This brings me back to that gorgeous September day and the mysterious and enchanting music a little boy, in tune with nature, drummed for me on a puffball.

This is a reprint of a story in Roy’s last book, Tales of the Wild, a Year with Nature.