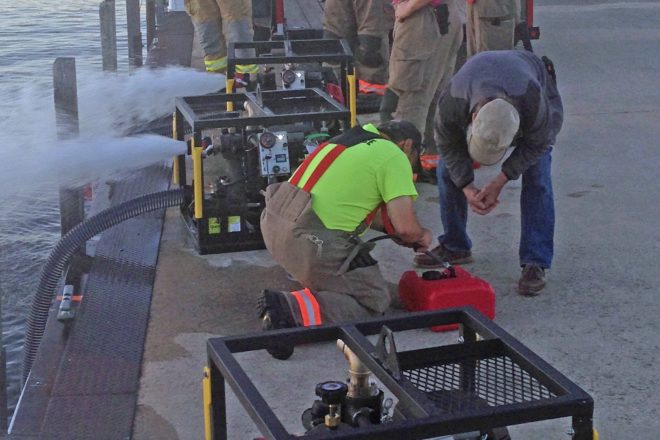 Four portable pumps have been commissioned for firefighting on the 2,800-acre Chambers Island.

With about 50 seasonal homes on the island seven miles off the shore of Fish Creek, Chambers Island is under the municipal oversight of the Town of Gibraltar. Last July 9, a cabin burned to the ground on the island.

“Right now on Chambers Island we have a very outdated tender that was, I believe, originally from Southern Door and also an old fire engine that has essentially been converted into a large brush truck,” said Gibraltar Fire Chief Jerrad Anderson. “They’re old, they’re tired and they’re honestly too big for the roads on Chambers Island, if you can call them roads. Most of them are logging trails. Working with some of the members of the Chambers Island Association and town board, we decided a good way to go forward is phase out those trucks – they’re an accident waiting to happen – and go to portable pumps system.”

Anderson said the four portable pumps can each pump about 300 gallons of water a minute.

“With it being an island, we can set up the pumps anywhere,” he said. “If we needed to, we could hook them up in a line, pump one next into the next, and we have 3,000 feet of 2½-inch hose so now we can reach any place on the island by dropping the pumps at a water source. With a minimum amount of space and equipment, we can have far better coverage on the island now than we’ve ever had.”

With the pumps will come training for island inhabitants.

“We’re starting a CERT program. It’s Citizens Emergency Response Team, where we’re going to be involved with training – continuous training – with residents of Chambers Island, how to operate the pumps and equipment and how to handle emergency situations,” Anderson said.

The island residents are lucky to have among them Al Matzke, who is the assistant fire chief with the De Pere Fire Department.

“Last year Al Matzke started some of that training,” Anderson said. “Now we’re making it an official program with SOPs [standard operating procedures] and SOGs [standard operating guidelines] and sign-offs…so should an emergency happen, the people who say they are trained actually are. We have the paper trail of their training. In an emergency everybody wants to help, but we want to make sure everyone’s safe doing it. With the new equipment and this new push and getting the actual people on the island more involved and more trained, I think we’re going to be far better off.”