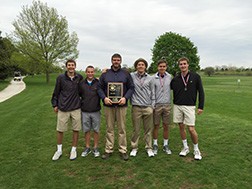 It hurt Matthew Meacham to laugh on the morning of Wednesday, June 10. Despite his pleas, his employees tried to force him to choose between enjoying humor and avoiding a sharp pain in his side. Meacham was not sick and had not just returned from a buffet line. Rather, he had been tackled the day before by a bunch of teenagers.

The Gibraltar boys’ golf team reached the Division III state tournament for the first time since 2012 after finishing second at the sectional meet. They finished seventh of eight teams at the state competition, held in Verona, Wis., on June 8-9. Normally players tackle coaches after winning a championship, but the Gibraltar players mobbed Meacham all the same. The experienced group had come to love their head coach and made his last tournament in charge a memorable one.

“This team is special like all teams that have gone to state at Gibraltar because of the chemistry within the team,” said Meacham.

That chemistry produced a team vision early in the season by a pair of seniors, Sam Higginbotham and Grant Heiman.

“Grant and I were determined to get back to state from the time we were freshmen,” said Higginbotham. “Knowing this was our senior year and last chance, we got the rest of the team on board and got in the right mindset.”

Their chemistry also made them a fun, if perhaps unruly, bunch.

“Throughout the year, especially during regionals, sectionals and state we were a bit of a handful,” said Heiman, “but [Coach Meacham] always controlled the situation and knew how to joke around with us, but was also serious when we needed to get the job done.”

Higginbotham agreed: “I will always appreciate how Coach Meacham would allow us to joke around and enjoy ourselves, but he also knew when to keep us in line and make us focus on being productive players.”

Both players agreed that they will leave Gibraltar golf with fond memories of their teammates, Coach Meacham, and Coach Taylor Mueller.

Meacham, a true Door County man, has been a fixture in the county’s golf scene for years. He was introduced to the sport by Cory Dahl (yes, this author’s father) when he was 19 years old.

“My claim to fame in golf is that I took Matt Meacham golfing,” said Dahl. “In spite of me, and not because of me, Matt became one of the best golfers in Door County.”

Meacham’s career in golf began at Cherry Hills. When the superintendent there, Gene Vanleire, introduced him to the golf course management side of the sport, Meacham knew that the links was where he wanted to make his career. After working at the Orchards for a number of years, Meacham reached his goal of becoming superintendent of Peninsula State Park Golf Course in 2010.

Before taking over as head coach at Gibraltar, Meacham served as an assistant for Bob Speilman and then Fred Anderson. Meacham strives to instill in his players the same values, morals and goals that he learned from Speilman and Anderson.

After a successful campaign in 2015, Meacham has decided to step down as head coach.

“It was the right time,” said Meacham. “There were four seniors and one junior on this year’s varsity team and I knew we had a good team. There’s something about stepping down when you leave a program on top.”

While coaching can be strenuous and time-consuming, Meacham is glad for the experience.

“I would like to thank the Gibraltar board of education and parents of the students I have coached for allowing me to represent Gibraltar and to be a positive influence in their kids’ lives.”

As Dahl said, “I don’t know enough about technique to help someone correct mistakes, but Matt became a very capable instructor and successful coach.”

His excruciating laughter the morning after the tournament is a testament to that.