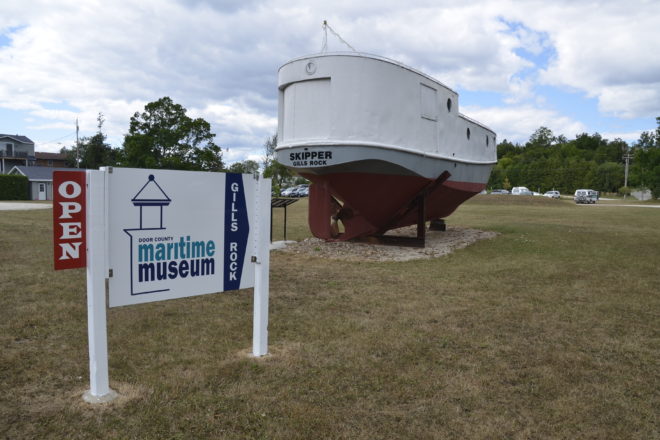 The Door County Maritime Museum-Gills Rock will be renamed the Death’s Door Maritime Museum in 2018. The name change will be celebrated with a renaming ceremony July 4, 2018.

“We wanted to pique additional interest and create extraordinary excitement by changing the name to something rich in maritime lore,” said museum Executive Director Amy Paul.

The Death’s Door Maritime Museum traces the area’s commercial fishing tradition. It boasts the wooden fishing tug Hope and a replica net shed complete with fishing boxes, net reel and other traditional fishing supplies. Visitors have the rare opportunity to explore, inside and out, the 45-foot wooden fishing boat Hope, which was built in 1930 by Sturgeon Bay Boat Works and owned by the well-known Stanley Voight fishing family. A video of the tug’s final fishing trip in 1992 is showcased as part of the exhibit. The museum also features a shipwreck and scuba diving exhibit.

Death’s Door may be famous for having lent its name to both the Door Peninsula and Door County, but this strait of water that passes between Washington Island to the north and the Door Peninsula to the south is rich in history and legend. The exhibit explores the origins of Ports des Morts, as it was referred to by French explorers, all the way back to the native American tribes and the legends associated with them. Some of the many shipwrecks which went down in the treacherous strait are explored as well as thrilling accounts of the hearty fishermen who regularly work its waters.

On July 4 the renaming ceremony will take place at the newly named Death’s Door Maritime Museum at 12724 W. Wisconsin Bay Road, Ellison Bay. There will be a special statue unveiled to honor Door County’s fishing industry and traditions. For more information visit DCMM.org or call 920.743.5958.