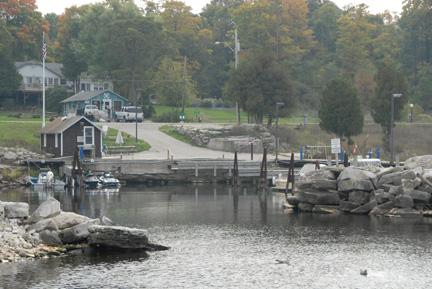 The Gills Rock shoreline will look much different if the Town of Liberty Grove moves ahead with a 98-slip marina plan.

After five years of discussions the Town of Liberty Grove is near a vote about whether to purchase a well-recognized stretch of shorefront property in Gills Rock.

Residents got their first look at the town’s proposal to buy three shorefront parcels at an informational session Aug. 17. The parcels include 431.5 feet of shoreline and 2.22 acres and would cost a total of $2,350,000.

Though the price was the big question on everyone’s mind when the meeting began, what defines an elector was the hot-button issue at the meeting’s end.

That’s because a town vote on the purchase does not follow the same procedure as a general election or referendum. Town electors will gather at the town hall Sept. 8 to voice opinions on the purchase, after which an elector may make a motion to buy the properties. Then, those in attendance will vote, likely through secret ballot.

To vote, Wisconsin State Statute states that you have to have been a resident in the town for at least 10 days prior to the vote and are otherwise qualified. Many towns trust in the honesty of residents in such votes, but several people in the audience asked that some type of proof that an attendee actually lives in the town be required.

Town Chairman John Lowry said the town had planned on allowing any taxpayer to vote on the issue, based on the opinion of the legal counsel of the Wisconsin Towns Association. That may not be the case, however, and the town board asked its attorney, Jack Bruce, to provide them with clarification on what constitutes an elector.

As the meeting began, Lowry emphasized that the property purchase is being considered separate from any plans for how to use the property. Tension built in the town in late 2007 into 2008 when there was a push to buy 11 properties in the area to develop it into a 100-slip marina at a cost of over $13.5 million.

To quell concerns, the town board passed a resolution on May 20, 2009 declaring that the purchase of the property would be considered separate from the development of any harbor structures. The resolution also declared that any marina-type structures would be brought to the public to vote on.

The properties up for purchase are owned by Weborg Bros. Dock LTD, Jeff and Elizabeth Weborg, and the third property is owned jointly by Richard, Randy, and Michael Johnson. The property owners originally approached the town about selling their parcels – along with eight others in the area – in 2005 to keep them for public use. The owners said the properties would go up for sale anyway, and they wanted to give the town the opportunity to purchase before selling into private hands.

But the fair market value of the three properties in question is nearly $900,000 less than the purchase price agreed upon, a point that worried many in attendance, including real estate agent Mary Kay Shumway.

“These numbers don’t add up with the current marketplace,” she said.

Lowry repeatedly emphasized that the purchase price was arrived at through lengthy negotiations and that it represented the best agreement the town could come to. Whether that price is fair, Lowry said, is up to the electors to determine when they vote.

The purchase price does not include the cost of any future improvements to the property for use as a park, marina, or preserve.

The meeting began with town attorney Jack Bruce explaining the terms of the purchase agreements, while the town’s financial advisor, Brad Viegut of Baird and Associates presented the financing scenarios the town is considering.

Viegut laid out scenarios for a 15-year bond versus a 20-year bond. The town’s taxpayers would save $400,920 in interest costs by choosing a 15-year option. Both options would cost taxpayers an additional $0.26 per $1,000 in property valuation on their property tax bill.

Electors will get another chance to ask questions at a second informational session Aug. 31 at the town hall at 7 pm. Attendees will get the opportunity to voice their opinion on the project at the Sept. 8 meeting, but Lowry was emphatic in saying that he will not let that discussion get out of control and devolve into finger-pointing at neighbors and accusations.

“I will not tolerate it,” he said.