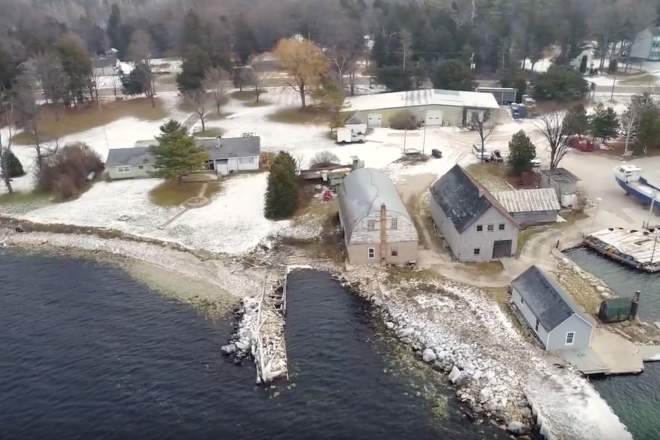 A pair of Liberty Grove residents presented a draft plan for the Gills Rock waterfront park to the Liberty Grove Parks and Property Committee Sep. 10.

Liberty Grove residents Steve Eatough and Mike Bharke shared preliminary ideas for the parcels the town acquired in October 2018 for $1.45 million. The town did not commission the plan, but when the vote was taken, Town Chair John Lowry emphasized that the town would determine future park development based on residents’ feedback.

“I have a deep, abiding love for Door County, and that’s the sole reason for being here this morning,” Eatough said. “If the people are supposed to have input, then the people had better come up with a plan for the park.”

Eatough said the plan was developed with the help of Nancy Aten of Landscapes of Place and was based on the results of a survey the town sent out last spring that asked property owners what they would like to see done with the parcels. That survey, which received 644 responses, identified the preservation of fishing and maritime history, silent-sports access, a pavilion, a safe harbor and launch ramp, repurposed docks for public use, and green space as the top desires.

The property includes 440 feet of shoreline, a boat launch, a pier, a home that will be removed, and buildings used by fishers.

“It was only right to pay tribute to the fishing families that inhabited this property for 150 years,” Eatough said.

The plan suggests using reclaimed lumber and materials to construct an open-air pavilion; using low-impact, natural materials to create a playground area; and installing benches in the park and on the fishing pier. Trails, restrooms, a kayak launch, native plants and grasses are also part of the proposal.

Committee Chair Cathy Ward said people should consider the plan “hugely preliminary.” Betty Weborg will continue to live in the home on one of the parcels for more than a year, and the town has not appropriated funds for the park.

Committee member Lou Covotsos applauded the plan and the citizens’ work but emphasized that any implementation would come in phases and be constrained by finances.

“The catalyst for the Ellison Bay beautification project was that the committee raised some of the money itself,” he said. “Private skin in the game would help expedite a bit of the plan.”

Town Clerk Walter Kalms quoted the late Keith Bridenhagen to explain the opportunity that exists at the park.

“Keith said you don’t really realize what a unique piece of property it is until you go out and walk the shoreline,” Kalms said. “It really is special.”

The town has not hired an engineering firm or engaged in other planning for the park because it is waiting to gain full access to the property, which will happen when Weborg vacates her home next year. Any buildings erected on the property would require town voters’ approval.

At its next meeting, the committee will discuss creating a new ad hoc committee for planning the park.

The committee discussed the increased use of the Garrett Bay kayak launch by commercial outfitters. Several residents said kayak outfitters have sprawled kayaks, equipment and vehicles in the parking lot, taking up much of the space or blocking access to benches and launch areas.

Covotsos volunteered to talk to other communities such as Jacksonport to find out what they charge commercial operators for use of launches and piers, and the committee will review usage rules at its next meeting.

“I think it’s cool to be able to honor somebody while they’re still around,” Ward said. The committee voted to recommend that the board approve the bench.