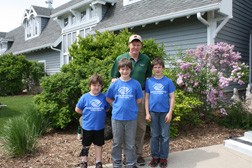 “We are thrilled to have Bob & Madeline Harlan serving as honorary co-chairs for our outing again this year,” said Executive Director Julie Davis. “Their support, along with the support of a number of other individuals from the Packers, such as Mark Murphy, Jerry Kramer and Mark Tauscher is great affirmation of the work we are doing for the youth of Door County. Currently half of all the Sturgeon Bay elementary students are members of the BGCDC and the funds raised from the golf outing allow us to continue to charge a nominal $10 membership fee for the entire school year.”

The outing consists of 18 holes of golf, lunch, heavy hors d’oeuvres, awards, and a live auction. The cost of the event is $900 for a foursome or $225 for an individual and 100 percent goes to the BGCDC. The outing is limited to 128 golfers and the deadline to register is May 22, 2015. For more information or to register call 920.818.1046 or visit bgcdoorcounty.org.