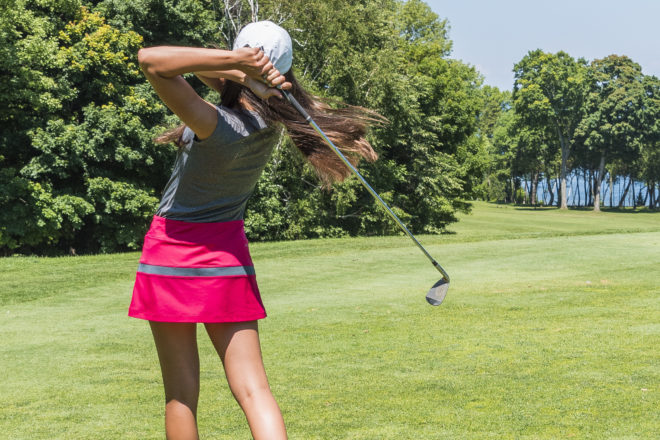 Early August was not great for golf.

Literally speaking, a heat wave across much of the country made it unbearable to even take a few practice swings in the afternoon, much less play 18 holes. Not so literally speaking, golf — the game — was dealing with some rough press.

The biggest sports brand in the world, Nike, announced it would be stepping down from the golf equipment industry. It would no longer be fashioning golf balls and clubs. This was a shocking revelation to most, but only those outside the golf industry. Nike had been a golf supplier for less than two decades, a relative blip on the golf equipment radar.

Think about it this way:  if Nike opened an ice cream shop between Wilson’s Restaurant in Ephraim and Not Licked Yet in Fish Creek, then proceeded to make very average ice cream, would you be surprised when, after the demand for ice cream had subsided, Nike pulled out of the Door County ice cream business? Probably not, unless summer became a yearlong season in Northeastern Wisconsin.

The same goes for Golfsmith, a major golf retailer that recent reports say is considering filing for bankruptcy. Golfsmith has been around much longer than Nike has, but investment after investment turned Golfsmith into a behemoth that owned many tinier brands that consumers stopped caring for. If golf’s popularity would remain inelastic for decades and decades to come, well, Golfsmith would be in great shape. As a brand focused exclusively on the fifth, sixth or seventh most popular sport in the world, that is currently not the case.

All of this (and other distressed stories from the golf world) come as byproducts of the sport’s decline from an unsustainable peak, which it reached about a decade ago in the mid-2000s. At that time, the number of players nationwide was increasing at an alarming rate. Thirty million people were playing golf at least once a year.

Courses (and the massive amounts of money required to build them) were popping up out of nowhere. Golf was booming, you may recall. With the prodigious Tiger Woods, then dominant as ever, the sport’s popularity was bounding, despite the amount of money often required to play it. Golf had climbed up the pop culture mountain so quickly that something was bound to happen when it peered out over the other side.

Golf fell. What had become the norm quickly became the charming and increasingly distant past. What happened in early August 2016 were the late, (un)surprising results of the golf (and economic) bubble bursting. The ripples are still out there, folks.

Could golf get back to that holy level? The same pieces are in play, right? Tiger Woods is still playing golf, and now we’ve got Jordan Spieth, right? Yes, but the most important pieces — the dollars and cents that made up many golf fans’ disposable income in the mid-2000s — are not as much a certainty anymore. In the years since 2008, other, cheaper hobbies have taken some of that popularity for their own.

You don’t need a college degree to understand the basics of supply and demand acting upon the golf industry. The demand for the game isn’t what it used to be 10 years ago, but look at the “dreary” numbers a littler closer. Twenty four million people played golf at least once last year, which would stand as a 20 percent decrease from 2005. That figure also represents the same number of people we saw playing golf in the mid-’90s. The sport was plenty big then; it has just (not-so-simply) regressed to that pre-Tiger time.

The difficult part of this economic-like cycle is that the supply in golf isn’t just golf balls and clubs. It also comes in the much more relatable form of teachers, coaches and courses that employ people. So golf is adapting and will continue to adapt.

Courses (and course designers) are making moves to be more efficient. Instructors and coaches are changing teaching habits that lean toward longevity, and the forms by which we know this game (18 holes, nine holes, a walking foursome) are being adjusted to create modern-day demand. Look no further than Peninsula State Park and its six-hole “short course” as a prime example. Golf is in transformation.

We must remember:  golf is a niche sport. For a few years, it was the cool kid at the table, but that niche sport’s run is over. Again, that’s OK. These things tend to go in cycles. With golf, the change is slow but effectual, much like the game itself.