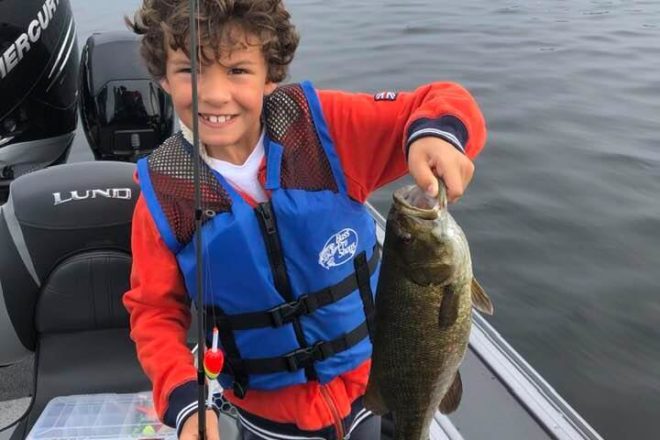 Green Bay anglers are finding a smorgasbord of fish species willing to take the bait.

Yellow perch action is heating up right along with the weather this month, and there’s been a wide variety of sizes available. Many anglers are keeping fish seven to 11 inches, with an occasional jumbo that’s a foot long or more. Whether targeting shallow weed beds, mid-range reefs or deep mud, most fishers are using fatheads or shiners to score. Leaf worms, redworms, wax worms, nightcrawler pieces, small leeches and crab tails are also good bets.

Smallmouth bass are very active in five to 15 feet of water. Nightcrawlers, fatheads and leeches work well, but most diehard catch-and-release fans prefer soft plastics or a variety of hard lures, including topwater baits, crankbaits, spinnerbaits and plugs.

Walleye action has been very good most days from Dyckesville to Chaudoir’s Dock. There are also fish scattered northeast of there, mainly around reefs, points and deep weeds. Trolled spinner and live bait combos or crankbaits are favored, but you can drift or anchor and jig or slip-bobber over structures, too.

Bluegills, crappies, sunfish and rock bass are active in many harbors and marinas, and northern pike and the occasional muskie can be found around reefs and weed beds, or cruising shipping channels.

A few trout and salmon have come off the Green Bay side of the peninsula from Gills Rock to Green Island, but the best action has been on the lake side.

The best chinook catches have been during the first and last couple of hours of light on flies, spoons and plugs trolled in 80 to 180 feet of water or more. A steadier daytime bite has been for rainbow and lake trout in 125 to 350 feet of water.

Kewaunee/Door Salmon Tournament Is On

Two of the key rules are that everyone on the boat who is 10 or older must have a ticket before fishing, and that fishing is allowed only in Kewaunee and Door county waters.

Tickets – $25 for the entire event or $13 for a one-day chance – are available throughout the contest at Kap’s Marina, Jungwirth Hardware, Baileys 57, Howie’s Tackle, Greystone Castle, Algoma BP, Accurate Marine and Center Court Convenience.

More than $50,000 in cash and prizes are on the line, including daily port prizes all nine days at each of the five weigh-in sites. Organizers are expecting multiple 30-pound-plus fish to top the leaderboard in a contest that typically pays out more than 150 places.

A lakewide contest, Racine’s Salmon-A-Rama, had six 30-pound-plus kings the first four days, along with a 26-pound lake trout, 20-pound rainbow trout, 18-plus brown and 14-plus coho.

Salmon and trout certainly are finding plenty to eat, and many anglers hope the DNR raises more chinooks to release in 2020.

News from the Friends of Wisconsin State Parks

The Friends of Wisconsin State Parks’ website (friendswiparks.blogspot.com) has a boatload of great information, including a downloadable newsletter, online store and details about the latest photo contest and voting for the best state park in 10 categories.

The Friends group supports the work of more than 80 local chapters, including those in Door County, to preserve, promote, protect and enhance Wisconsin state parks, forests, trails and recreation areas.

If you’re a camper, biker, hunter, hiker, angler or any other type of park visitor, cast your vote for your favorite state park, forest, trail or recreation area by the Aug. 30 deadline.

Photo-contest winners will have their best shots featured in the 2020 Friends of Wisconsin State Parks calendar. Photos that show scenes from the parks, forests, trails and recreation areas must be entered by Sept. 3.

For the first time, hunters and wildlife enthusiasts can take an amazing virtual tour of Boone & Crockett’s 30th Big Game Awards. Wonders of Wildlife in Springfield, Missouri, is hosting B&C’s celebration of the largest trophies entered in its record books during the years 2016, 2017 and 2018.

Also featured is a permanent Heads and Horns exhibit, dedicated in 1922 to the “vanishing big-game animals of the world.” The historical exhibit originated at the Bronx Zoo in New York City and helped to spark America’s conservation movement. Check out the awards exhibit, which ends Aug. 3, at biggameawards.com.

For the past 25 years, the Boat Owners Association of the United States has tallied the nation’s most popular boat names based on requests for designs from its boat-graphics department.

Take a closer look at the annual top-name lists and possible meanings at BoatUS.com.