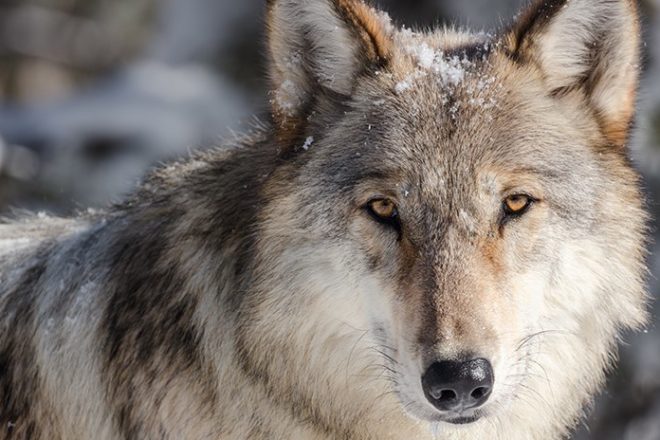 Why are Republicans so afraid of the big bad wolf?

On Friday, Nov. 16, as one of the final acts of the 115th Congress, House Republicans in a partisan vote passed HR 6874, which would remove Endangered Species Act (ESA) protection for gray wolves.

Introduced by Republican Rep. Sean Duffy of Hayward, Wis., Duffy told his colleagues in a speech that anyone living in the northern parts of the United States “understand that the wolves are a huge problem.”

“This final, pathetic stab at wolves exemplifies House Republicans’ longstanding cruelty and contempt for our nation’s wildlife,” said Brett Hartl, government affairs director at the Center for Biological Diversity. Two days before Duffy’s bill – titled the “Manage Our Wolves Act” – passed in the House, the Minnesota-based Center for Biological Diversity sued the U.S. Fish and Wildlife Service to preserve federal protections for gray wolves and force the agency to develop a national recovery plan for the species. The suit was filed a day after the service denied the group’s petition for a nationwide recovery plan, saying its regional approach meets the legal requirements.

But the group said the agency is required under the Endangered Species Act to foster the recovery of gray wolf populations across their former range, not just in the northern Rockies, the Great Lakes region and the southwest.

“It is a partisan issue because wolves are in many ways and have been for a long time the surrogate and symbol for Republican opposition not only to endangered species but certainly the larger theme of federal government control,” the Washington, D.C.-based Hartl told the Pulse in a telephone interview. “That was true in Wyoming and Yellowstone during those introductions there. That’s been a constant thing we’ve wrestled with for many years. This particular House of Representatives is probably the most hyper-partisan we have seen. It’s disheartening and sad, frankly, that the level of vitriol and antipathy for so many Republicans is so high when it comes to endangered species.”

He pointed out that during the 115th Congress, Republicans launched more than 115 attacks on the Endangered Species Act. Since Republicans retook the U.S. House of Representatives in 2011, they have introduced more than 350 attacks against the Act, even though 9 out of 10 Americans want the Act strengthened or left unchanged by Congress, according to a 2015 poll.

“That’s something they’ve done and we’ve seen before,” he said. “The environmental community has won every single case related to wolves because the law and science is on our side, so if they don’t limit judicial review, they’ll just keep losing because we aren’t done with wolf recovery yet.”

Hartl points out that judicial review of government is one of the fundamental concepts of governmental checks and balances, especially in “this administration where science is under attack.”

“The House Republicans know the only way out of that box is to limit judicial review, and it’s completely legal,” Hartl said. “But it’s a terrible signal because it undercuts our approach to traditional checks and balances.”

Hartl said the lawsuit requests that Fish & Wildlife follow procedure and move wolves to threatened status before removing all protections.

Hartl said it is the very fact that wolves have been made a partisan issue that Fish & Wildlife is willing to loosen rules to get out of wolf management.

“If you’re endangered, you should go to threatened before becoming recovered. Fish and Wildlife keeps trying to skip the threatened stage and go to recovered,” Hartl said. “So we filed a lawsuit to try to show in part that they’re still not following the normal process and the normal path forward, and that is ultimately probably going to lead to the same politically flawed dealings that Fish & Wildlife might try again in the near future because they feel the pressure and want to get out from under wolf management. It’s early in the lawsuit. We’ll see where it goes.”

But in the meantime, Hartl expects Duffy’s bill to die in the Senate, and to see a friendlier environment for the environment in the 116th Congress.

“The American people overwhelmingly support the Endangered Species Act and the magnificent animals and plants it protects,” he said. “We don’t expect to see these disgraceful anti-wildlife votes next year under Democratic control of the House.”