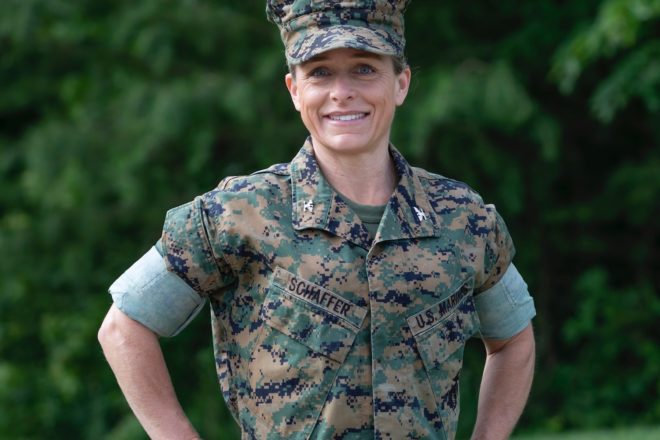 During my 29-plus years in the Marine Corps, it has been an honor to serve, work with and lead Marines. Many Marine Corps leaders have shaped my professional development, but some of the most formative mentorship as a leader came under the thumb of Al and Ingert Johnson.

Growing up in Sister Bay had many advantages. One of the blessings is the close-knit community where people look out for each other. Everyone is family – and you always take care of family. One of my extended families was cultivated within Al Johnson’s Swedish Restaurant, where I worked as a hostess from age 13 until going to Marine Officer Candidate School.

For me it was running. He’d ask, “How fast did you run today?” and always set some kind of challenge: “Tomorrow you can beat that time.” For others, he’d ask about family because many were seasonal help spending their summer away from their immediate family.

He would inspire us to work faster by clearing the tables himself quicker than anyone else, fostering healthy competition. The sense of worth he instilled in everyone – always expecting them to do their best – was a hallmark of his leadership. He created a family.

As I commanded my platoons, companies and battalions in the Marine Corps, I did my best to create a family, just as Al had inspired me to do. I learned from Al that when people feel like they belong to a family,  they don’t want to disappoint. They will go above and beyond expectations and produce excellent results.

In the Corps, I endured countless days of ironing perfect creases in my camouflage blouse and pants, polishing my leather boots until they shone, ensuring every detail of my appearance was correct. Perfect uniforms are just one of the many ways in which Marines are known for their discipline.

As a leader, I knew that if I needed Marines to perform a task correctly, I had to set the example, require the attention to detail, ensure proper execution and then reinspect after making any corrections. Ingert Johnson would have made a great Marine in this respect!

One reason I could survive the strict military order and discipline was because of the demand for discipline and attention to detail Ingert taught me, especially regarding our uniforms and personal appearance.

When Ingert walked into the dining room, her appearance and poise were perfect. Everyone would check themselves because they knew if anything was amiss, Ingert would notice, and no one wanted that mark of disappointment from her.

We wore dirndls that had to be properly cleaned and ironed, bow tied correctly. In short, our appearance had to be picture perfect. Anything less, and there would be repercussions. Memorably, during my first year working, I was sent home a few times to iron my dirndl so that I would be “respectable.” She didn’t say, “Change it tomorrow” or “Do better next time.” Ingert required me to make it right immediately.

Besides our uniforms, hair had to be worn in a professional manner, including the clips and barrettes we used. I remember specifically Ingrid telling me I had to change the barrette I was wearing because the color was “not appropriate.”

Ingert insisted on adhering to a proper professional appearance, demanding that attention to detail. She inspected and then reinspected to ensure corrections were made. This discipline and attention to detail carried into all facets of my Marine Corps life, and I have Ingert to thank for instilling this in me at such an early age.

My time working for Al and Ingert Johnson gave me the foundation and fundamentals from which I built my leadership style. I hope I have lived up to their expectations and have become a small reflection of Al and Ingert.

Colonel Julie Schaffer, a 1986 graduate of Gibraltar High School, is serving in Stuttgart, Germany, with Marine Forces Europe/Africa. She grew up in Sister Bay and worked at Al Johnson’s as a hostess for nine years. Schaffer attended the University of Illinois at Urbana-Champaign on a Naval ROTC scholarship and was commissioned as a 2nd Lieutenant in the Marine Corps in 1991. After 30 years as a logistics officer in the service, she will be retiring this fall.