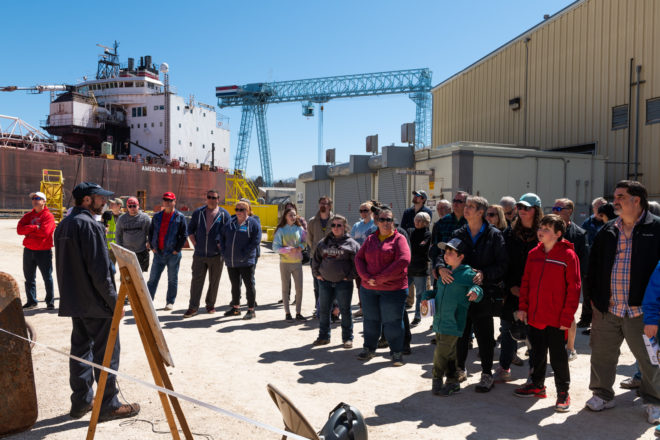 Retiree and volunteer Karl Schroeder talks to shipyard-tour visitors with the 1,004-foot American Spirit (formerly called the George Stinson) and the crane known as Big Blue in the background. One little-known fact: There’s a lunchroom at the top of the 166-foot-tall gantry crane, said shipyard-tour volunteer Ron Clark. The crane can move up to 200 tons, and the skilled operators can place loads precisely or near where they need to go courtesy of radio communication with colleagues on the ground.

Some years, the winter fleet has sailed away for freight-hauling duty before the Rotary Club’s annual shipyard-tour fundraiser takes place, but this year, 1,000 people who bought $20 tickets for the tours got a chance to approach and learn about two of the oldest Great Lakes super-freighters.

They also saw a 1,004-foot-long vessel up on blocks, without its props or rudder, in Fincantieri’s large graving dock, and they got a close look at the exterior of the newest freighter on the Great Lakes.

Docked along the bay of Sturgeon Bay, the 858-foot-long bulk freighter M/V Roger Blough floated high in the water, wedged and winched between the 1,000-foot-long Stewart Cort and a 70-year-old, oil-fired steamship, the Cason J. Callaway.

At least this month, the Stewart Cort had a much different cargo, said tour volunteer Stu Fett, who retired after 47 years at the shipyard.

“The Stewart Cort is being used as hotel accommodations for the crew that is going to be on the Mark W. Barker,” Fett said, motioning northeastward toward a somewhat shorter, new vessel.

Fett said that while carrying taconite or other freight, the Cort would need 23 or 24 crew members to operate, but the Mark W. Barker, built by Fincantieri Bay Shipbuilding, could need as few as 16 or 17 crew members.

Visitors on the tour asked about the future of the Roger Blough, which caught fire and sustained millions of dollars’ worth of damage 15 months ago. Fett said he couldn’t speak to the future of the vessel, which is part of the Canadian National Railway Great Lakes Fleet, along with the Callaway.

Fett said U.S. Steel originally wanted the Blough to be the first 1,000-foot freighter on the Great Lakes, but a week before its scheduled 1971 launch in Lorain, Ohio, a fire on board killed four workers. The company scaled back on the size while doing repairs to complete the Blough.

The Cort, built for Bethlehem Steel, became the first “thousand-footer” on the Great Lakes, Fett said. Launched in 1972, it had construction delays, too. A Mississippi yard built and connected its fore and aft sections so it could navigate the Atlantic Coast and seaway to Erie, Pennsylvania, where its center sections were added. Fett said its side tanks were added after it got through some locks that could not handle its 105-foot total width.

The anticipated christening this spring of Interlake Steamship’s Mark W. Barker will make history – and not just for the Sturgeon Bay yard, said Craig Perciavalle, Fincantieri Bay Shipbuilding vice president and general manager, who was hired for the shipyard’s top spot after Todd Thayse retired in January of this year.

“That will be the first bulk carrier built in the Great Lakes for 40 years, so that’s a pretty big milestone for U.S. shipbuilding,” Perciavalle said. “We have a lot of great customers. Interlake is one of them. We were happy to win that contract and to finish that up.”

When the 639-foot-long vessel was floated out of dry dock at Sturgeon Bay in November 2021, it marked the first launch of a large bulk freighter in the lakes since 1983, and the first for Interlake since 1981.

Perciavalle said Fincantieri did not allow any public access to the south yard, where the company has been helping Fincantieri Marinette Marine complete sections of frigates for the Saudi Arabian navy. Though he did not specify a date or month, he confirmed that it won’t be long before the company needs to ramp up to build sections of modern frigates for the U.S. Navy.

Perciavalle said there’s still plenty to see on the commercial side of the shipyard, and the annual Rotary Club tours should continue as the years go on.

“This is really phenomenal,” Perciavalle told the Peninsula Pulse. “To have this open to the public through the Rotary, I think is a great thing for us. I think it’s a great opportunity, and we look forward to this every year. We’re very proud to be a part of this and to do all we can for a community that provides a tremendous amount of support for us.”

Perciavalle said the Rotarians seem to have the tour routes “down to a science. They pretty much run the show, and we provide the support.”

This is the 29th year that the Rotary Club has held the event. Tour proceeds go to the club’s scholarship funds and student-exchange program, tour chair Keith Mutchler said. The Rotary Club did not have tours in 2020, and it delayed the 2021 tours until September because of COVID-19 concerns.

Years ago, the Rotary Club did not limit crowd sizes.

“A couple of years, we had way too many people, and we were pushing things and pushing the volunteers,” Mutchler said.

The club now ensures a high-quality event by limiting the number of visitors it allows in, and it always sells all of the available tickets.

“We sold out about two weeks ago, and we continued to have people emailing or approaching us for more tickets,” Mutchler said.