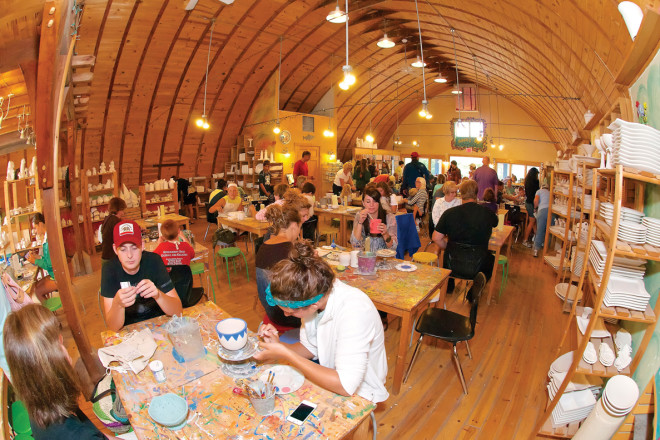 On Peninsula Players Road, just south of Fish Creek, there’s a creative playground for people of all ages, a place where both artists and amateurs can release the impulses rambling around inside their brains and transform them into something real.

That place is Hands On Arts Studio, an artistic arena co-owned by Cy Turnbladh and Karon Ohm, people who know something about having a vision and the drive to make it a reality. 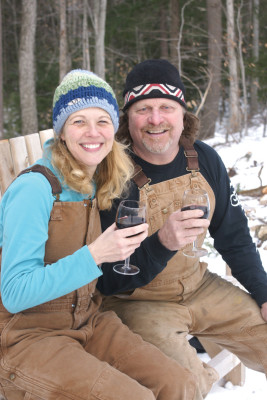 “It started out at [Cy’s] apartment, in his kitchen and living room. He just had ceramics and fused glass for people to make,” says Karon, speaking of Hands On’s humble beginnings 16 years ago. “Then he kept passing this abandoned farm, and he asked if it was for sale.”

Hands On moved to that farm 14 years ago, but if you haven’t made something there recently you might not recognize it. In 2006, Cy and Karon added a metalworking building, and in 2009 a new studio space was built to accommodate a growth in jewelry making and painted glass projects.

Karon says she thinks the expansion was driven by people’s need to get more bang for their buck.

“During the [recession], I think people wanted to buy experiences instead of things,” she says. “So that played out well here, because they’d get both.”

While ceramics, metal, jewelry and glass would be a pretty good list of mediums for an art studio to let you create in, Hands On doesn’t stop there. Those who visit can also become potters, paint pre-assembled wood pieces, make mosaics, wear their art on their sleeves (or chest) by painting a t-shirt, or mash it all together into something uniquely their own.

“Sometimes people make awesome projects,” says Donna Shanks, who works in the fused glass studio creating her own art and facilitating the art of others. “They come in, and they say they’re not artistic; but they make really great stuff.” 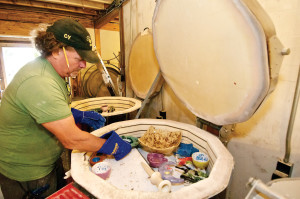 Some artists come by themselves and some artists come as couples, but Hands On is a great place to bring a group, especially of your most creative acquaintances. The air of collaboration and camaraderie that comes with having a bunch of artistic partners lends itself especially well to the creation of great works of art.

And even if you don’t make something fantastic, you can at least blame it on your friends or family distracting you.

“We’ve had family reunions coming through – a big increase of that in the last two years,” says Karon. “We’ve hosted girlfriend weekends, wedding parties. They brought in pizzas and beers and wanted to do activities. We had a bonfire for them.”

The level of difficulty of any art project at Hands On is only as high as the individual makes it. Some people take their time learning and perfecting their chosen medium, cutting each piece of glass just right before gluing it to the other pieces it will fuse with or carefully eyei 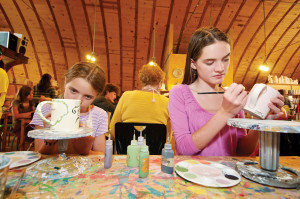 ng up where to strike before sparking up their spot welder.

Others just squeeze paint out of a bottle and watch it fall towards a t-shirt that’s spinning in a repurposed pottery wheel, preferring to let centrifugal force do most of the artistic heavy lifting. It’s all about what’s most fun for the artist.

“That’s our main mission:  fun with art,” says Cy. “Some people call and they think we’re a school. They ask when classes start. We want to teach when people want to learn…but mostly we’re just here to encourage people to make art.”

That encouragement comes year round because Hands On is open on weekends throughout the winter. Cy and Karon are among those who want to phase out the term “off season,” saying that creativity doesn’t have one and neither should Door County.

“Hands On wasn’t open in the winter at the beginning, but then I thought, ‘This is silly,’” says Cy. “People are here, and I’m here. We should be open.”

“Door County is beautiful year round,” says Karon, “and it’s nice to be open and provide something for people to do.” 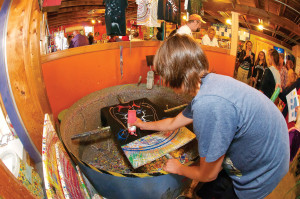 Some people say the winter months are some of the better months to visit the studio, says Cy, because it’s quieter and easier to focus on what they’re creating.

But don’t expect Hands On to stay quiet for too long. There’s always something new around the corner for Cy and Karon, an inkling or idea that’s ready to grow and come into being as the next big thing to hit Hands On.

“I often joke and say ‘Welcome to my husband’s stream of consciousness,’” says Karon.

“I always considered myself more of a designer than an artist,” says Cy. “I really like to design ‘things.’ Even a studio system like Hands On, that’s a work of art, too.”