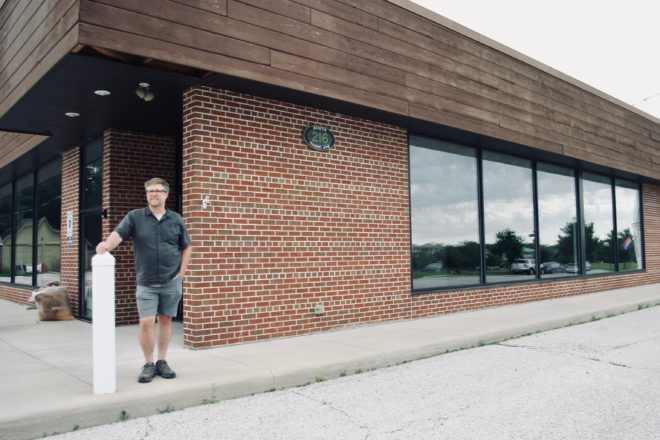 Adam Goettelman at the new store he hopes to open in the new year. The building at 216 S. 3rd Ave. began life in 1968 as Fischer’s Super Valu. Photo by Jim Lundstrom.

Adam Goettelman and the staff at Healthy Way Market are excited about their coming move to a former grocery store that will be almost three times larger than the store they will move from at 142 S. 3rd Ave. in Sturgeon Bay.

“We’re really landlocked here right now. The staff is bumping into each other,” Goettelman said. “It’s not a comfortable work space because of how much we’ve grown.”

The move is just across the street, to 216 S. 3rd Ave., to a long-vacant building that began life in 1968 as Fischer’s Super Valu grocery store, a historic fact that Goettelman is proud to promote.

“We’re the only actual locally owned market in Sturgeon Bay,” he said. “The dollars spent here are left in the community.”

Healthy Way began in 1994 on Madison Avenue on Sturgeon Bay’s west side when acupuncturist Al Stewart added a juice bar to his acupuncture business. Two years later, Fred and Dawn Wittig took over Healthy Way, shifting it from an acupuncturist’s office with a juice bar into a smaller version of the store it is today, selling health foods and supplements. When Dawn Wittig died in 2014, Fred sold the store to Goettelman, who immediately had expansion on his mind.

“I had known them from my farming days. They were one of our wholesale produce accounts in the summer,” Goettelman said. “His wife passed, and I was going through a divorce. We were like two passing ships in the night who needed each other. We’re four and a half years in and couldn’t be more thrilled.”

When Goettelman was first looking to move from the original west-side location, he briefly considered the location he is moving into.

“I was looking at that but didn’t want to take a risk on that big of a project and wasn’t sure if the community was ready for it,” Goettelman said.

Knowing of his interest in the building, a year ago in August, one of the owners called him, saying the building might be available and asking whether he had any interest.

By that time, Goettelman was certain of the community support for his store.

“Community support has been fantastic,” he said. “We’ve been as busy in the winter as the summer, almost. After four years, I know the locals want us.”

That initial phone call led to several months of negotiations, and then Goettelman went after financing, which included a loan from Sturgeon Bay’s Revolving Loan Fund.

“We worked with the Bank of Luxemburg for our main financing,” he said. “We worked with the city and the Door County Economic Development Corporation (DCEDC) as part of their revolving loan fund. It was an interesting process to go through. Everybody was good to work with. Nice to see the city of Sturgeon Bay supporting a local person and not giving this money to an outside interest to start a business here. Glad to have the city as a partner, basically.”

The city contracts with the DCEDC to work with businesses seeking support from its revolving loan fund. DCEDC Executive Director Jim Schuessler said this was an easy project to support in that it reinvigorates a long-vacant building and supports a successful local entrepreneur.

“This is quintessential entrepreneurial development – adding more jobs, bringing new life to a vacant building,” he said. “Adam is an entrepreneur with a successful business, doing well in a place where he doesn’t have a parking lot. He’s assembled a great team. It’s a pleasure to help them on to the next level.”

Plus, as the county’s head of economic development, it troubled Schuessler to drive on Oregon Street and see the 8,000-square-foot vacant building every day.

“It bothers you to look at an empty building,” he said. “Building acquisition is a good thing.”

Moving Healthy Way will not mean creating another empty storefront on 3rd Avenue. The current store is already spoken for, but details are not ready for public consumption.

“Some people think we’re the kooky vegans or the weird vitamin-supplement store. We’re really not,” Goettelman said. “I’m not even here from an individual health standpoint. I’m here from a whole environmental outlook. I’m here from my passion for building dirt for the farm. Healthy can be so many things. I decided to keep the name. I feel like we’re respecting what those two families did ahead of me.”

Although hesitant to name an opening date because this will be a major renovation project, Goettelman hopes to be open at the new location in January and plans to be shut down for the move for only two or three days.

“In the buildout, I’m working with as many local contractors as possible. Probably 90 percent of the contractors are from Sturgeon Bay or Door County. It’s a small community. It’s all about relationships,” he said.

“We’ll open with a soft opening with some specials, and then wait for summer time to do a big grand opening. I’d like to see some bands in the parking lot and kids running around.”

“The operations manager and I have been having conversations about that,” Goettelman said. “We’ll be at eight more immediately, which will put us at a staff of 20 to 22, and within two years, we’ll be at 30 people.”

The new store will allow for an expanded kitchen.

“That will mean a large expansion for our grab-and-go meals,” he said. “All departments will fill out, and we’re adding some new departments. We hope to have a greenhouse on site, selling vegetable transplants. We hope to have large gardens outside. We’ll be ripping out a section of the parking lot right on 3rd Avenue. If you’re looking from Martin Park, it will be one big veggie garden with seating inside there.”

He also plans to add a homesteading department where you can buy potting soil, seeds, organic pest-control products and items for home canning.

“We’re focusing on giving people the tools for building a home garden. Stop cutting your lawn and grow some food,” Goettelman said.

He was also hoping to put in a classroom at the new store but said they have already run out of space. However, he said the kitchen will be large enough to hold cooking classes with area chefs and teach people how to prepare items from their Community Supported Agriculture baskets.

“We’ll focus more on our fresh department, having more pre-prepped ingredients, so somebody can grab spiralized zucchini, buy all the ingredients ready to go, and go home and make their own meal. Some day we’d like to get into meal-planning kits,” he said.

So stay tuned for the new and improved Healthy Way Market.

“I’m thankful the community has supported us and thankful we get to do this,” Goettelman said. “It’s been a crazy four years. And I’ve been thankful for every minute of it.”