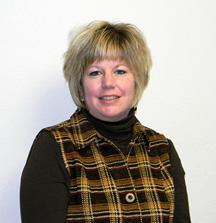 When Heather Lhost, now Heather Olson, graduated from Gibraltar High School in 1992, she was undecided about her future.

She had taken business related courses, she was Girls Senior Athlete of the Year, and she liked Northern Door – her roots in the county extend back many generations: her great, great, great grandparents, Thomas and Kirsten Goodletson, settled in Ephraim in the 1850s in the now historic Goodletson Cabin.

Olson spent a year thinking about her future and working a number of jobs, including serving as hostess and busser at the former Hotel Du Nord Restaurant where she had been employed since she was 14. And then, she was contacted by Kathy Ray of the Kellstrom-Ray Real Estate Agency.

“Kathy called me up and asked if I wanted a job,” Olson recalled. “She needed an assistant who could help with rentals. ‘Come down for an interview,’ she said. ‘When?’ I asked. ‘Now,’ she said.”

Of the interview, Olson noted, “She explained my duties, and I started in March.” The job was a good fit; she earned her sales license in 1995 and has been selling property for Kellstrom-Ray ever since.

Early in 2000 Heather Olson earned a broker’s license allowing her to own or manage a real estate company. “Don and Kathy approached me years back about buying the business,” said Olson. “Jody and I thought about it for years before we finally did it. Eva was still a baby when we first talked about it!”

Just as their familial roots run deep along the peninsula, Olson explained that Kellstrom-Ray is one of the oldest real estate agencies in Door County. The late Kermit and Marion Kellstrom founded the company in 1948. Don and Kathy Ray, who were both employed by the Kellstroms, purchased the business in 1974. The Olsons became owners in May of 2007, with the Rays remaining active as agents in the firm.

“I enjoy what I do,” Olson said. “It’s challenging, but it’s also rewarding when you see how happy people are buying their first home or their first vacation home. It’s so rewarding to help them make a dream a reality!

“And every day is different,” she continued. “I don’t know when someone will call or walk in the door. And it’s interesting to visit so many properties!”

Olson has been a multi-million dollar sales producer many years, with her largest being the year she bought the business: seven and one-half million dollars. The economic downturn of the last couple of years has affected real estate as it has most other businesses, “but there is so much inventory out there for a buyer to come up here,” she said, “and there are still motivated sellers and good interest rates, even in the present market.”

The real estate sales in Northern Door are unique in that many of the properties sold are secondary homes, she noted. Subsequently the market is rather relaxed; sellers seldom have situations forcing them to sell, or buyers, to buy. And perhaps because the peninsula is a popular place to live, houses here have kept their value relatively well.

“I think it’s a great place to live,” Olson said, “a safe, beautiful, relaxed atmosphere. There are so many great things to do in Northern Door.”

She and her family, like many of the people who live in Door County, enjoy snowmobiling, boating, fishing, camping – outdoor activities that are available almost at their back door.

“It’s a well-rounded, close community,” she added. “People know each other, are caring and sincere, and come together in times of need.”

As do many young businesswomen with families, Olson faces challenges with domestic responsibilities, including two daughters in school.

“My day often starts at 5:30 in the morning,” she laughed, “and ends at 10:30 at night.” But even though her work schedule is seldom nine to five, at the same time it allows her to be more flexible in other respects.

“Sometimes it’s a juggling act!” she said. “Thankfully I have a good husband and family!”

In many respects her co-workers at Kellstrom-Ray are also like a family, she said. “Most are Door County natives who work well together” and give the business “a personal touch.”

As to the future, “Kellstrom-Ray has been here since 1948,” Heather Olson said. “I hope to continue it for decades to come!”

Visit Kellstrom-Ray across from the marina in Sister Bay. For more information visit http://www.kellstromray.com or call 920.854.2353.