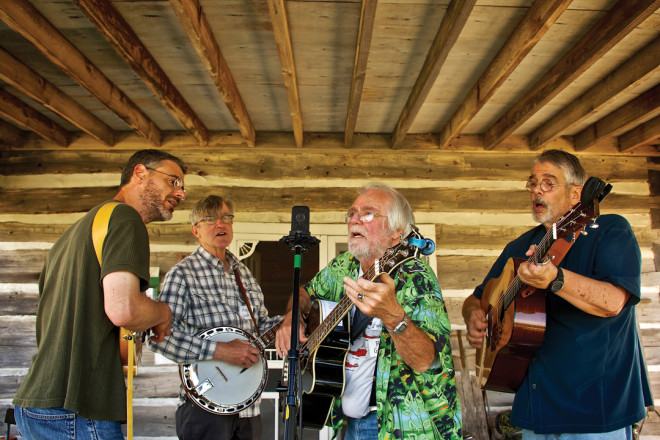 It is a rainy Wednesday night in October at Tad Gilster’s home and one by one, the members of Fish Creek’s only bluegrass band show up, ready to rehearse for that Friday’s show at The Cookery.

Gilster’s guitar is in his lap, having just shown me the difference between flatpicking and fingerpicking. We’ve been talking for an hour about his band’s unintentional beginnings and his history with bluegrass music. From the sounds of it, there isn’t much to say. 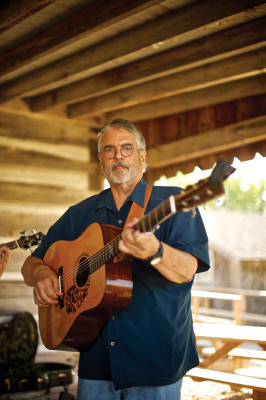 But when he excuses himself, and his guitar, to join Andy Coulson (banjo), Rick Gordon (bass) and Tony Gebauer (mandolin) at the other side of the room, there really isn’t any need for words. The explosion of bright vocals, the twang of strings, and the exchange of soulful smiles says it all about the group Highland Road.

Like bluegrass itself, Highland Road is relatively new. But its beginnings can be found in the friendship formed between Andy and Tad in the early 1970s.

Both men had a brief history playing music in high school and each had been introduced to bluegrass, with Tad’s first listen being Doc Watson and Andy’s being Earl Scruggs.

“I loved the harmonies, the singing and I liked the guitar runs, the fiddling,” Andy explains. “I just liked everything about it. I guess it’s kind of like a disease just because you get hooked on it. You get to the point where you can listen to it all the time.”

It took two decades before the friends connected their limited musicality and started getting together every Wednesday night for mini pickin’ sessions – Tad on guitar and Andy on banjo.

For the two, their get-togethers were more about sharing their passion for bluegrass than anything else.

“We never had any intention of forming a band,” Gilster says. “…It was the music really rather than having any objective that was important to us for years.”

In the early 2000s and after more than a decade playing together, Tad and Andy were asked to play at a benefit concert for the Door County Land Trust. The crowd loved it, though Tad has a different recollection of the quality of their sound.

“We were awful,” Tad laughs. “We played a medley of two old fiddle tunes and I played the same one twice. Well, Andy was playing one of each and it didn’t sound right to us, but …”

He sighs, then smiles. 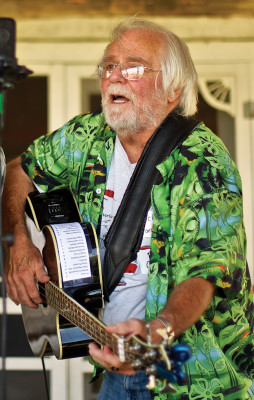 Shortly after, Rick asked to sit in on the duo’s pickin’ sessions to hear what they had to play. Pretty soon, he told the guys that he had just purchased a bass.

Rick refers to himself as a “Ricky come lately” to music who picked up his first instrument, a bass guitar, about the time he was set to get Social Security. Tad and Andy told him to bring it over, and the duo became a trio.

Still, forming a band wasn’t even so much as a fleeting thought.

Then, a couple years later, TR Pottery owner Tony Gebauer bought a mandolin and joined the non-band. The group was asked to play at another benefit concert for the Land Trust in 2007 and decided that, if they were to do that, they “should probably get a name.”

Highland Road was born. The name pays homage to the road Andy drove to get to Tad’s home every Wednesday before the band was formed.

The band’s chemistry is undeniable, both as musicians and friends, considering the jabs and friendly banter that comes when you ask them what makes Highland Road such a good band.

It comes down to two things:  a love of bluegrass and the joy of getting together for their pickin’ sessions every week.

Even today, Highland Road doesn’t necessarily market itself as a band due to the fact that 75 percent of the foursome still works full-time. An average year includes less than a dozen performances, with a majority of those being performed for fundraisers or nonprofits. 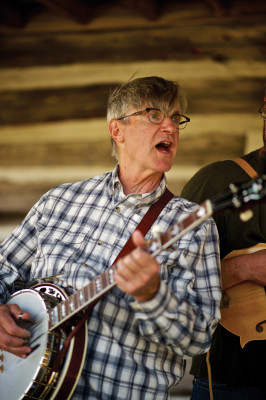 Their setlists include a good mix of traditional and contemporary bluegrass covers, with some of their favorites being Flatt & Scruggs, The Gibson Brothers, Balsam Range, Blue Highway and The Special Consensus.

When it comes time to perform, their focus is on having a good time and sharing bluegrass with a county whose music culture doesn’t include much of the genre.

“The simplest explanation is that it isn’t in the cultural background like in the main bluegrass states – Tennessee, Kentucky, North Carolina,” Tad says. “There are really only two significant American genres of music that really started in this country – jazz and bluegrass.”

Bluegrass is a relatively new genre, having been started by American mandolinist, singer and songwriter Bill Monroe in the mid-1940s. According to Tad, it is the only genre for which music historians can agree on when it started (within 12 months).

Monroe was heavily influenced by fiddle tunes of the Celtic, Scottish, Irish and British when creating the lively tempoed music that is bluegrass. It is characterized by vocal harmonies and a mix of four- to six-stringed acoustic instruments (banjo, mandolin, guitar, fiddle, resonator guitar and bass).

It was born during an era when music defined itself, Tad says, meaning it wasn’t actually called bluegrass until the late 1950s. Tad guesses Monroe might not have even referred to himself as a bluegrass musician.

“Bill Monroe would have called himself a country musician, I think,” he says. “The name came from his band, which was Bill Monroe and His Bluegrass Boys because he was from Kentucky, the bluegrass state. That’s where the name of the genre came that somebody eventually started calling it that.” 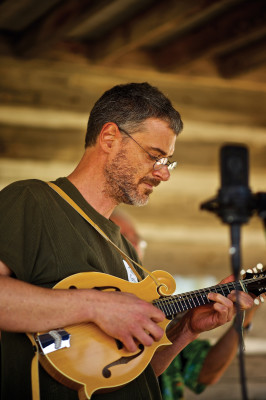 Today’s music carries on many of bluegrass’ original elements, though members of Highland Road will agree the level of virtuosity among younger bluegrass players is much greater. There has also been a surge of women joining the genre, as well as young musicians who want to put a bluegrass spin on non-bluegrass tunes.

That’s all well and fine for Highland Road’s four members who are introducing bluegrass to pockets of Door County residents, one performance at a time.

“We don’t have a plan. We don’t have goals or objectives. And if you asked each of the four of us what we see the band as being about, you’ll get four different answers,” Tad says. “But I think the one thing that everyone would agree on is that they love the music and they’d love to see more people learn about bluegrass.”

Listen to these and you’ll get an idea of both traditional and modern bluegrass. ~Tad Gilster