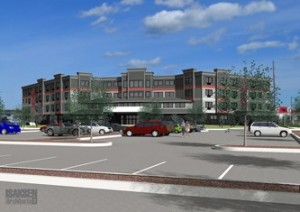 A single-spaced, five-page letter that alleges the Pinkert Law Firm is representing both the City of Sturgeon Bay and Bob Papke, developer of the proposed Westside Redevelopment project hotel, resulted in a defamation lawsuit against the letter writer, Sturgeon Bay resident Carri Andersson.

The letter was sent on Jan. 22 to City Attorney Randall Nesbitt, various city officials and news media. The lawsuit was filed the next day, on Jan. 23, by Nesbitt, who is also a partner in Pinkert.

In her letter, Andersson alleged “multiple potential violations of the Open Meetings Law and possible conflicts of interest by members of The Waterfront Redevelopment Authority.”

“This was sort of a classic hand-off situation,” Nesbitt continued, saying that Smith set up the limited liability company for Papke, but when he learned it was a city project, he told Papke that he would have to find another attorney.

“In 32 years of practicing, I’ve never had to do this,” Nesbitt said of the defamation lawsuit. “Never been publicly and directly attacked by somebody who has published false statements. And, quite honestly, never wanted to. If she had just written the letter to me, or to me and the city officials, I would have called her in and said, ‘Look, here are the real facts. You got this wrong.’ But she sent it to 29 people and media outlets. That’s a bell I can’t un-ring.”