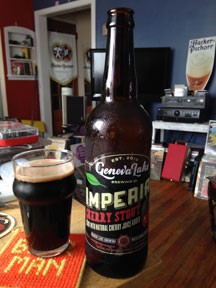 Cherry Fever Stout was one of my first homebrewed beers back in 1990. The recipe was taken from the bible for every novice homebrewer of the time – Charlie Papazian’s The Complete Joy of Homebrewing.

I was living in Oshkosh back then, so it was much easier for me to drive to a pick-your-own cherry orchard in southern Fond du Lac County rather than Door County. I had never picked cherries before. I think Papazian called for about five pounds of cherries, but I distinctly recall that I wanted 12 pounds. In fact, I wanted to bump up everything in the recipe. I guess I was going for an Imperial Cherry Fever Stout. Most importantly, I did not want the cherry flavor to be overpowered by the roasted malts.

Did I mention it was my first time picking cherries? When I got to the weigh station, I discovered that me and my picking crew – my daughter and a friend of hers – had picked 60-some pounds of cherries. So in addition to Cherry Fever Stout, I made a cherry lager, a cherry wheat (long before that become a popular flavor among craft brewers), and probably some cherry pies and bread.

Out of all of that, I recall that the Cherry Fever Stout hit the mark for me. First and foremost, it was a stout, but a cherry stout. With equal billing, the cherries should be as prominent as the stout.

So, whenever I see a commercial cherry stout, I must try it. Imperial Cherry Stout is from Geneva Lake Brewing Co. of Lake Geneva, Wis.

The brewery says it is a full-bodied winter seasonal, but I could drink this beer every day, in any season. It weighs in at a hefty 10.6 percent, but it is so smooth and delicious you would never peg it for a high-alcohol brew.

Yummy chocolate tones of the stout become undertones here as the stinging Maynard Ferguson-like high notes from the Door County cherries take the lead. I love that effect.

This Imperial Cherry Stout by Geneva Lake does all that. If, like me, you are a fan of fruit beers and stouts, treat yourself to this one because it is the best of both of those worlds. You’ll be glad you did. I found mine at Koepsel’s. Definitely worth the 12 bucks.