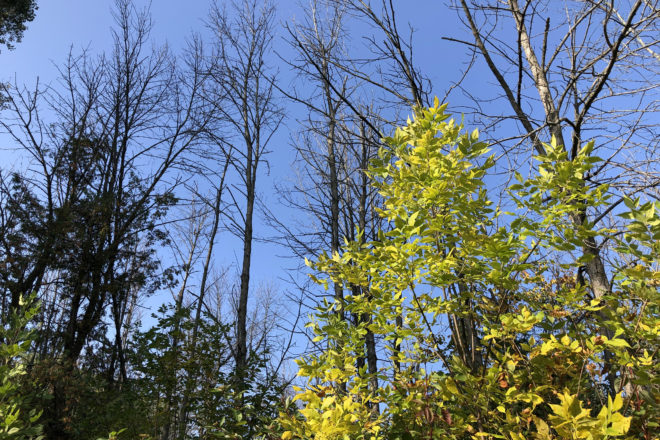 Property owners and land managers in portions of Door County whose trees are not yet affected by the ravages of the emerald ash borer (EAB) must plan ahead for the tree-killing insect’s arrival.

That’s the word from the state forest-health expert who oversees the county. And, parks officials in Sturgeon Bay and Fish Creek echo that advice.

Since arriving in Door County in 2013, the borer – which is native to northern China – has killed many stands of ash trees in the Sturgeon Bay area, Potawatomi State Park and as far north as the Town of Gibraltar and Peninsula State Park.

McNee and Door County invasive-species team leader Samantha Koyen said EAB evidence has been found in Baileys Harbor and southern Liberty Grove – the town that makes up most of the northern tip of the peninsula. The insects have not been found on Washington Island or Rock Island, but all it takes is someone hauling infested firewood onto the ferry to change that. (The moral? Don’t move firewood. Burn it as near as possible to where you cut it or bought it.)

“There are chances it’s up north,” Koyen said. “We just haven’t noticed it. Unfortunately, I don’t think that we’re going to be spared.”

Infested trees that have just a tiny bit of die-back at the top one summer often grow just half their leaves the next year. Koyen said damage from woodpeckers seeking food will reveal the most affected trees this winter.

Sarah Kelly, a member of the Parks and Lands Committee for the Town of Gibraltar, has watched that process during the past two or three years in Fish Creek Park. Ash trees border trails in much of the nature park hidden east of Highway 42.

The town planted 100 trees of various varieties after removing 40 ash trees that potentially posed a hazard to hikers at Fish Creek Park. The town also lost large ash trees in Clark Park along the waterfront.

Losing shade trees along the creek concerns Kelly because the committee is trying to hold down the temperature in the waterway, a vital spawning ground for fish. The town continues to work to create a safe passage for fish, and it wants the new trees to provide shade for the creek.

Kelly said the town is paying to treat and save one large ash tree, which carries a recurring cost of $75-$100. Treating smaller trees should cost less than that, but landowners need to realize they have to continue treating the tree year after year, or the insects will return and kill it.

It’s too late for the City of Sturgeon Bay to treat ash trees, said Mike Barker, municipal services director. “If it was something where you could do one treatment one year and it would have taken care of the problem, that would have been worthwhile.”

Barker began his position in 2018, and by then, the borers had already killed most large ash trees on city property.

The city removes trees that could shed branches or fall on park visitors or structures, and there’s plenty to cut. When workers have any available time, he can send them out to cut dead ash trees. When trees are too massive or in a location that’s too unsafe for his crew to cut, the city pays $700-$800 for a service to drop the tree. Then the crew hauls the pieces to the compost site.

Will Door County Have a Tree Deficit?

Will ash trees completely disappear, and will the county have a major tree deficit if that happens?

Ash trees fill up to 50 percent of lowland and wet forest areas, but they account for only 5-20 percent of the tree species in upland areas. Experts say that other trees tend to grow in where ash trees die, and young ash trees continue to sprout. The borers also don’t kill the smallest trees, and McNee said scientists have hope that green ash trees can survive to maturity to spread seed.

McNee and Koyen said owners of seemingly healthy ash trees can plan now to prevent the need for clear-cutting later and can begin planting for diversity and long-term woodland health. Koyen notes that invasive woody shrubs such as buckthorn and honeysuckle tend to take over the forest floor when opportunities arise, so owners and land managers need to stay on top of their spread.

Both McNee and Koyen advise landowners to consult with certified local arborists or state foresters to come up with a plan. Considerations include whether the tree poses a hazard, provides value through shade or as part of the landscape, and can die safely and benefit wildlife.