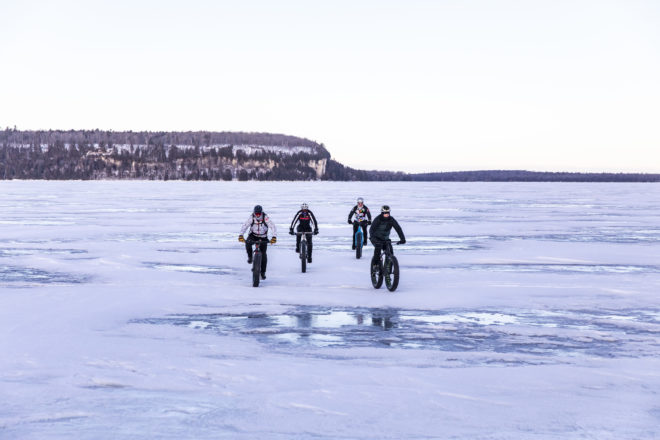 Chris Miller, Eric Scheller, Deb Neuville and Myles Dannhausen Jr. warm up their legs for the trek across the ice from Anderson Dock to Eagle Bluff. Photo by Amy Sacka.

Brad Lindenberg, a Sister Bay ice fisherman, once shared an inspiring take on what can seem like a desolate winter life here. He called the snow-covered bay the “white sand beach.”

“All these people spend millions on their waterfront homes and pay thousands in property taxes, and in the winter we get it all for free,” he told me as we talked about the joy he gets from ice fishing.

He didn’t turn me into an ice fisherman, but 15 years later, I’ve come to understand what he meant. Enough Christmases have gone by for me to accumulate the gear necessary to enjoy the iced-over peninsula of January and February. Several years ago, I received a fat bike, which changed my understanding of what constitutes “riding weather.”

A couple winters ago, at the suggestion of Brian Fitzgerald, I swapped out my tires for some studded treads from Nor Door Sport and Cyclery, opening the door to a new adventure: ice biking.

People expect to see you unloading your bike at a trailhead during the summer and fall, and since fat bikes hit the scene a few years ago, we’ve grown accustomed to seeing people ride in the snow.

But when you’re rolling your tires onto the frozen surface of Eagle Harbor in Ephraim, you still get some quizzical looks, like the one I got from photographer Amy Sacka as I pedaled off a pier and onto the lake before dawn one freezing February morning in 2019.

She waved frantically from the shore, barely visible in the first light of day. I thought she might be a prudish Ephraimite upset that I was tarnishing the pristine view, like the ones who hated the pontoon boat we had moored in the harbor years earlier.

“What is this?!?” she asked after I rode to her perch on the shore.

I told her a few friends and I were meeting to ride across the bay, seeking a new view of the peninsula — and fulfilling a photo idea hatched with Brett Kosmider, my business partner at Peninsula Filmworks.

Sacka was circling the Great Lakes on a photography assignment for National Geographic magazine and happened to be up early, driving through an empty Ephraim, when she found me biking along on the ice.

“Mind if I take some photos?” she asked.

Soon Chris Miller, Deb Neuville and Eric Scheller joined me, wrapped head to toe in layers of winter gear to battle the brisk air. We got lucky that the wind wasn’t blowing as we waited for the sun to come up for our sunrise trek to Eagle Bluff.

Sacka captured our journey from the ground while Brett Kosmider captured it from the air. Studded tires helped us keep a grip on the ice and hard-packed snow, though we learned quickly to follow a straight course and avoid sharp turns.

A mile later, we had crossed the bay and stood beneath Eagle Bluff, the sun by then lighting the steeples of Ephraim. We may not have been sunbathing on the shore like the waterfront property owners of summer, but we had the “white sand beach” entirely to ourselves — for free. And I realized what Lindenberg had meant all those years ago.