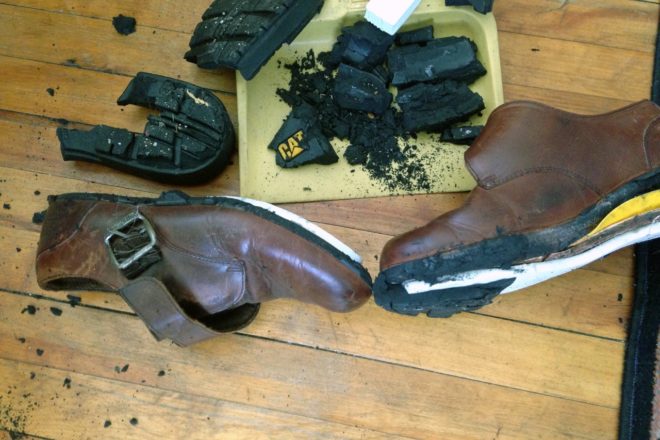 Well, that wasn’t supposed to happen. Photo by Jim Lundstrom.

Just because a guy doesn’t like to wear the same pair of shoes every day, it doesn’t mean he has a shoe fetish.

I’ve always liked to have an array of shoes. My tastes were far more exotic in my youth – snake, alligator, lizard skin shoes and a black pair of oxfords painted pink have all been in my shoe closet (yes, they have their own closet).

Then there was a long period where I just wore hiking and stomping boots. Find a good pair of boots and that’s it.

But during recovery from a bicycle mishap, and in my pleasant morphine and OxyContin haze, I bought a lot of footwear. I couldn’t walk, but I bought shoes.

The first was a pair of cowboy boots that I found on sale online. They’re not very comfy. The second was an expensive pair of scuffed-up looking hipster boots with side zips and wood soles. Wood soles are very impractical, maybe like wood dentures. The third shoe purchase was an awesome pair of Bass ducks that still feel like I’m walking on air. And the fourth was a pair of side-buckle shoes from CAT Footwear with massive rubber soles that reminded me of the big-soled shoes Teddy Boys wore when I lived in England back in the 1970s. They turned out to be great walking shoes.

But they went into the closet and I kind of forgot about them until a few weekends ago when I remembered how much I liked them, so I strapped them on and went for a walk in beautiful downtown Egg Harbor for the 5th annual Ale Fest.

I’ve always joked that I can’t believe gravity hasn’t gotten to an Ale Fest participant yet by making them roll all the way down Harbor View Park.

And suddenly I’m feeling wobbly, but not from drink. So far I’ve only had a pinch of Island Orchard’s Herbaceous Beast Cider and a few sips of The Expat, a rye saison from Fulton Beer of Minneapolis.

I looked down at my shoes and see there is a big chunk of black sole missing from the heel of my right shoe.

I live only a block away. I set out for home, with the right sole continually wearing away. Enough clings on to the shoe for me to walk without too much trouble. As I start up the outside wooden steps to my apartment, a third of the front sole on the left shoe falls away. Because it is such a large chunk, I pick it up and continue up the stairs, as other parts from both shoes fall away and I stop each time to pick them up.

By the time I arrive inside my apartment, my shoes are soleless. I sweep up the remains and arrange them around the remaining husk of shoe and snap a photo on my telephone, which I then send to CAT Footwear, explaining what had happened and that I thought they would want to know they have shoes with soles that disintegrate while being worn.

That’s all I was trying to tell them. I didn’t want them to make me whole. I’ve had the shoes a few years. They had a good life. I have never seen a pair of shoes just completely fall apart without any previous indication of a structural problem. This was complete failure.

What if I would have been farther than a block away? I’d probably be walking on stumps for the rest of my life.

The next day I received an email from a CAT Footwear representative: “Our warranty covers our products against defective material and/or workmanship for up to one year from date of purchase. Our warranty does not cover normal wear and tear, improper care, improper use, purchases from unauthorized retailers, or the natural breakdown of materials over extended time and/or use.”

I wasn’t asking about a warranty for my shoes. I just thought the company would want to know that the material on their shoes disintegrates, which I imagine could be a dangerous situation. That’s all.

So, now, one less pair of shoes in the closet. Must start looking for a replacement, but I think I will avoid CAT Footwear.

*Footnote for you kids: Imelda Marcos was the shoe fetishist wife of evil Filipino dictator Ferdinand Marcos, who ruled the island nation from 1965 to 1986, when he and Imelda were forced into exile in Hawaii by the People Power Revolution, which grew out of the 1983 airport tarmac assassination of Benigno “Ninoy” Aquino, and subsequent rise of his widow, Corazon “Cory” Aquino, who in 1986 was elected president in Marcos’ absence – becoming the first female president in all of Asia. While Imelda and her many shoes became the butt of endless jokes when she and Ferdinand were driven out of the Philippines and the world learned when it got a peek inside the abandoned Malacañang presidential palace that Imelda had 1,060 pairs of shoes, or 2,120 individual shoes (that is her account of the number of shoes; some sources say 3,000, but Imelda pooh-poohs that). Shoes were just one of her many extravagances. Her penchant for plunder earned her the designation of “kleptocrat.”