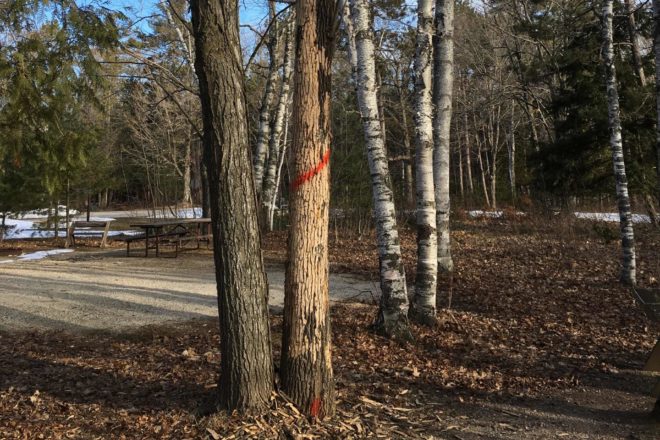 This marked tree has been infected by emerald ash borer disease. It shows signs of woodpecker flecking – noticeably near the base. Submitted.

During your next few visits to Potawatomi State Park in Sturgeon Bay, you might notice some marked trees and logging activity along roads, trails and campsites.

That’s because two diseases have affected the park: emerald ash borer and beech bark disease. To reduce their spread and address safety concerns for park visitors, the Department of Natural Resources will be harvesting affected trees.

“Both emerald ash borer and beech bark disease have a high fatality rate on the affected trees,” Park Superintendent Erin Brown Stender said. “Once those trees are infected, there’s a good likelihood those trees will die.”

Standing, dead trees present a danger to park visitors, so to reduce the chances of these trees falling in high-traffic areas, that’s where workers will be removing them. They are not removing all ash and beech trees from the forest.

“The logging operation shouldn’t be too difficult because we’ll be using those roads and trails as the corridor to move the logging equipment through the park,” Stender said.

It’s not known how long the operation will take, but the park has designated certain times during the year when it will take place. Stender said the work began in mid-January and will continue through the middle of May of this year.

If workers are unable to finish removing the infected trees by the summer, they will take a break and resume in fall 2020 and into the following winter.

Stender said winter is the best time for these sorts of operations: The park is less busy during the winter months, and it’s preferable to work on dry or frozen ground.

For this project, there is no plan to replant trees.

“This is a mature forest,” Stender said. “The cutting is very selective, so we’re not clear-cutting any areas. We’re not anticipating it to create any voids within the forest.”

The emerald ash borer is a wood-boring beetle that kills ash trees by eating what’s beneath the bark. There are visual indicators of the disease, such as exit holes, thinning of leaves at the tops of trees, and woodpecker flecking.

Woodpeckers “fleck” pieces of bark off the tree in search of the larvae below, leaving the tree to look picked apart.

Beech bark disease begins with an insect called a scale, which begins feeding on the bark sap. When it does, it loses its legs, becomes covered in a woolly wax, and remains there for the rest of its life. A fungus then comes in and works with the scale to create dead tissue on the tree.

When the scales reproduce, larger woolly spots begin to spread on the tree, sometimes covering the whole trunk. The fungus can also produce orange spots and rough bark.

Emerald ash borer is common throughout Wisconsin. Beech trees are not found throughout the whole state, but where they are found, beech bark disease has also been found – and most prevalently in Door County. Whitefish Dunes State Park had a similar outbreak and logging operation a few years ago, Stender said.