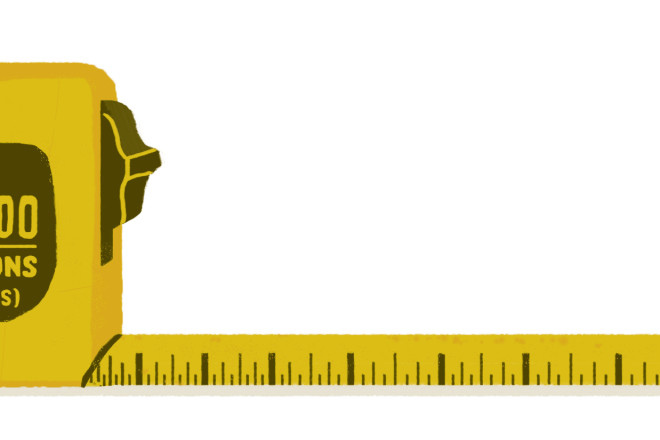 Some people don’t know a smidgeon is a real unit of measure. Same for a touch, a tweak, a trifle. Add a tad, a freck, a bit. Most people don’t know tape measure units come in inches and smidgeons, kinda depends on how dark it is, or if you’re wearing glasses, or if hurry counts.

After a previous reading of this publication I notice there is some doubt that the smidgeon is a real unit of measure, that the smidgeon is neither English, metric or Whitworth (to the charity of those who have worked on pre-1970 Brit cars). As for English measure, it’s based on body parts anyway, some of them more reliable units of measure than others, except to say everyone has one, or several. If some best not exposed to measure a 2 x 4, make that a 1½ x 3½.

I admit I do not universally carry a tape measure on my person or pocket. To cite my partner and brother Gary does have on his person at all times, a tape measure. This, the result of being a lawyer, with that lawyer mindset it is understandable why he might carry at all times some legal unit of validity. You cannot tell fish stories around my brother. He does not believe in American fiction the way I do.

The subject of smidgeons came up via the cabin project for the Boston School Forest, the cabin done in the classic Central Wisconsin log style of the 1850s and ‘60s. To reference the half dovetail notches used to hold the logs together at the corner. Effective, pretty to look at, if a trifle complex. Notice that last phrase contains a unit of measure, the trifle. One that I regularly apply to life in general and agriculture specifically, a trifle tired, a trifle nuts, a trifle expensive, a trifle long, I think most economists know the validity of this unit of measure. When building with logs the favored unit of measure is the smidgeon. When asked the size of the cabin I said twelve feet and a smidgeon, never mind twelve feet was close enough, the smidgeon is more accurate. Understand this project started out at the sawmill behind my loafing shed. This same structure my son-in-law, the townee, gets hilarious glee of, that I have a loafing shed. You know, sometimes it is quite appalling the scorn and discrimination farmers have to put up with from people who don’t know enough to not wear sandals in the barnyard.

The thing about sawmills in general is how they frustrate the attempt at precision, where every log that comes to the carriage has a natural bias against precision. Logs with curves, a hard knot, and then there are the anxious woods such as birch, elm, or oak that have consorted with squirrels with dirty feet as ruins saw blades. Dulls them in a twinkling so they suddenly wander off.

Technically the logs were supposed to be twelve feet long, if yet allow for the notch, some end checking, or just that a log sometimes goes kitty wompus. That is a highly technical term, kitty wompus, best used by trained professionals only. To the end saw logs come out twelve feet, sixteen feet…and a smidgeon, this yet to add the detail of notching the logs with a chainsaw, two cycle, full throttle held six inches and a touch past the operator’s face in pursuit of this half dovetail notch. To my mind about as precise as half a king’s right foot while taking place a smidgeon beyond your eyeball. Precision isn’t what’s directly on your mind at this particular moment. Close enough is really really good enough.

My wife thinks I should wear one of those hockey goalie facemasks when I do this notching thing. Her remark either means she loves my face or rather not put up with the mess. I’m a wise enough husband not to ask. To my mind it’s kinda like a matador wearing a bulletproof vest, which doesn’t leave any sport for the bull to exercise.

On the day we set up the logs with Jesse Glodowski conducting the log lift, the act took 25 minutes from beginning to end. Which is the neat thing about a notched log cabin, how it goes from nothing to something darn fast, which is the pioneering art in an A-cup. Short answer, don’t waste time with the tape measure.

Some people at the cabin raising were surprised that I stuck lath into the notches to take up miscellaneous slack, a.k.a. the smidgeon. I explained how the notches were done at 3,000 rpm at twelve below zero one morning in January. How normally I use a magic marker to design the notch but magic markers don’t work so well at twelve below, I used a crayon instead. Crayons don’t like twelve below either. Given the circumstance, precise enough.

Ever try to use a tape measure with mittens on? If you resort to pulling out the tape with your lips the tab freezes to your lips as looks ridiculous even when you’re alone. Which is why the cabin at the Boston School Forest is twelve feet and a smidgeon. Close enough.