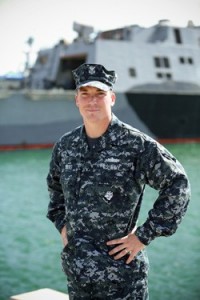 In his third tour of duty with the United States Navy, Washington Island native Daniel Oberg has landed an assignment aboard the new Littoral Combat Ship (LCS) USS Coronado, which will be commissioned in a ceremony at its home port of San Diego, Calif., on April 5.

A commander aboard the fast and highly maneuverable trimaran-hulled Coronado described it as “a big military jet-ski with a massive flight deck.”

“It’s made to be able to fight in the littoral, so very shallow waters,” Petty Officer 1st Class Oberg said in a March 24 telephone call. “Something that makes it unique, it’s an aluminum ship, making it extremely lightweight, and it’s jet powered, where traditional Navy vessels are propelled by props. This one has water jets. So it definitely makes it different as far as ship handling. It makes it a lot faster and you can use it in a lot of scenarios. It’s kind of plug and play. Instead of having a ship built for one warfare area. This one you can put on anti-surface warfare, surface warfare, air warfare, mine warfare, so really it covers the whole spectrum of war. No matter what’s going on, it can be used for the job.” 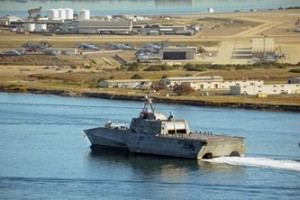 Oberg is a 2004 graduate of Washington Island High School who has spent nine years in the Navy.

“From my roots, being from Washington Island, grew up on a small island, always on the water,” he said. “I joined the Navy and moved to a larger island, Oahu. The second island I moved to you can drive for more than an hour in one direction. After that tour, my wife wanted to be nearer to family, so I got orders to do recruiting in Chicago. The in-laws were right down the street. Did just over three years on recruiting duty, a very successful tour. Upon completion of that, I chose orders to come to the West Coast and LCS seemed like it was the most demanding thing they had to offer. And I wanted to be on the cutting edge of what the Navy has to offer. This is perfect.”

Oberg said the 40-man crew is made up of seasoned veterans.

“We’re all very seasoned,” he said. “There are no first-term sailors here. Everybody’s at least three-term. We’ve all been on traditional Legacy class ships all over the world and were taught and learned how to do things a certain way. The Littoral Combat community, since it’s such a minimally manned crew – normally a ship of this size typically has a crew of 300 to 400 personnel – so we definitely work close together, help each other out and do a lot of cross-training. Cross training is very important. There is no way we could do our missions without that. So there’s not a whole lot of down time. We’re constantly training.”

Oberg is one of the ship’s boatswain mates. “We do a lot of deck seamanship,” he said. “We drive the small boats, we do all the anchoring evolutions, line handling evolutions. I’m also the search and rescue swimmer for my billet. We do a lot of preventive maintenance. It keeps us busy. I like to stay busy and this is the command to do that. It’s very high tempo. You have to be a hybrid sailor because you’re going to be asked to do a lot of duties.”

After the formal commissioning ceremony on April 5, the Coronado will become part of the U.S. 3rd Fleet, which leads naval forces in the Eastern Pacific from the West Coast of North America to the international dateline.

Oberg said there is no telling where the ship will be deployed but he does know that the crew of the Coronado will be putting the ship through its paces. “Right now, we’re slotted to do a lot of testing and it will also require some long stretches away from his wife, Kacy, and six-month-old son Brady.

“We’ve been together since before I was in the Navy,” Oberg said. “She’s been along with me the entire time, all the different deployments and duties. She signed up for it as well. A military spouse is the hardest job in the Navy, hands-down. She totally supports me. You couldn’t be successful, especially in a tight community like the LCS without good support back home.”