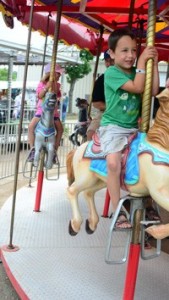 Laboring under the scrutiny of an Ad Hoc Fair Study Committee that was formed last September by the Door County Board in order to re-energize the annual Door County Fair, the seven-member Fair Board is hoping for blue skies and big crowds at this year’s fair, which runs July 31 through Aug. 4 at John Miles County Park in Sturgeon Bay.

As president of the Door County Fair Board, Thad Ash served on the Ad Hoc Fair Committee. He said there were ideas tossed around to change the date and pricing of the fair, but none of those suggestions were incorporated for this year’s fair.

“The main thing we’re looking at is to move the fair date,” Ash said. “Years ago, we used to have the fair in the middle of August. Now we’re starting on the 31st of July. Be a lot nicer if we were the second week of August. You get more crops.”

He said the current fair dates conflict with the Wisconsin State Fair in West Allis, which runs Aug. 1 – 11.

“We have some dairy exhibitors that exhibit in both places, so they have to pick and choose,” Ash said.

But change is all in the future and Ash and the Fair Board have their sights set on making 2013 as successful as it can be.

“We had Vic Ferrari last year. We had a very good turnout, and people asked us to put them on again, so we added them to opening night,” Ash said. “For those coming just wanting to listen to the music and grab a beer with their buddy, it’s five bucks to get in. If you want to go on some rides, for 10 bucks you can ride all afternoon and night.”

Door County cover band Glas Hamr takes the midway stage on Thursday, and the $10 admission gets you all the rides you want from 1 until 10 pm. In the grandstand that night is the Denil Auto & Trucking Race Mania with a two-person funnel race, relay race and the two-person enduro race.

Thursday is also entry day, when all the animals come in. Beef exhibits are judged that evening.

“Friday has all our dairy goat and dairy animal judging throughout the day,” Ash said. “Friday night we’ll have the sheep judging. On the midway, Boogie and the Yo-Yoz are playing. Admission is $10. That gets you in, gets you the music, gets you on the rides, and gets you in the grandstand. We’re also having a modified truck and tractor pull.”

Pigs, chickens and rabbits are the featured animals for judging on Saturday.

“In early afternoon we have the quality market animal auction, and then we have the Back Home Boys on the midway stage. In the grandstand we’ll have AMA flat-track motorcycle racing. That used to be huge up here and we haven’t had it in a lot of years.”

Also on Saturday Ash said they are holding the first-ever of what they hope will become an annual event.

“We’re having the Door County Firefighter’s Challenge,” he said. “It’s going to be a competition that is opened up to a few counties. They’ll have an obstacle course and that type of thing. In that same area, there will be a collector car show. Whoever brings the car in, free admission for the driver or owner and we’re giving them a $5 coupon for a refreshment item.”

The Northeast Wisconsin Antique Power Association will have old steel-wheeled tractors on display by the grandstand all five days of the fair.

“As far as 2014, we’re going to see what the numbers are this year, then we’ll meet and decide how to proceed,” Ash said. “There could be some changes.”