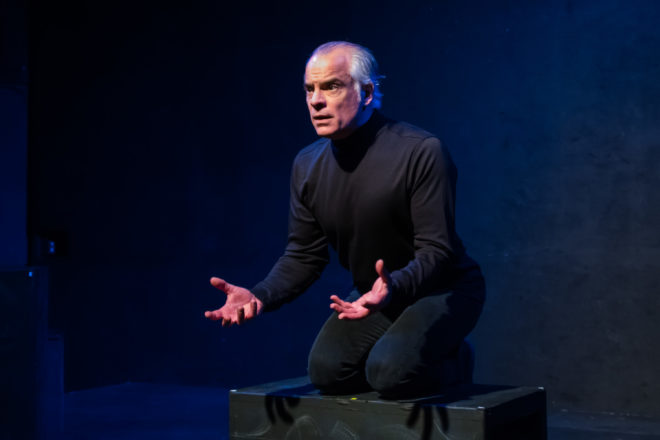 Jacob Marley’s Christmas Carol features Alan Kopischke as Jacob Marley. What happens to Ebenezer Scrooge’s mean, sour, pruney old business partner after death? Chained and shackled, Marley is condemned to a hellish eternity. He’s even given his own private tormentor: a malicious little hell-sprite who thoroughly enjoys his work. Desperate, Marley accepts his one chance to free himself: to escape his own chains, he must first redeem Scrooge.

So begins a journey of laughter and terror, redemption and renewal, during which Scrooge’s heart, indeed, is opened; but not before Marley discovers his own.

Performances will be held at 7:30 pm Wednesday through Saturday and at 2 pm for the Christmas Eve and New Year’s Eve matinees.

In other TAP news, 2017 TAP productions were honored by the Milwaukee Journal-Sentinel. The Milwaukee Journal-Sentinel has announced its list of the top ten productions and performances in Wisconsin for 2017. For the third year in a row, TAP has been included on this list. Compiled by theatre critic Mike Fischer, the list is drawn from productions he has reviewed during the year throughout the state. In singling out TAP’s production of Candide in this year’s list, Fischer writes, “Proving anew that it’s among the best of all possible places to see Wisconsin theater, director James Valcq’s eight-actor Third Avenue Playhouse cast delivered a fun and musically superior production of Bernstein’s classic operetta.”

Drew Brhel’s searing portrait of Mark Rothko in Red was singled out for Honorable Mention as one of the Best Performances of 2017. In his review of Red, Fischer wrote of Brhel’s performance, “One of the best performances I’ve ever seen this stage veteran give.”

In addition, Victory Farm, produced by Northern Sky Theater and written by TAP’s co-artistic director James Valcq along with Katie Dahl and Emile Coulson, was named as one the ten best productions of the year.