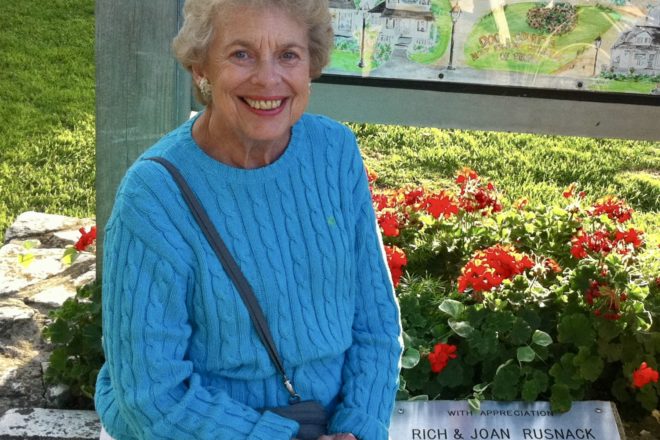 The story of most Door County entrepreneurs is almost a cliché: A trip to the peninsula starts a love affair with the scenic beauty of the area, which sparks a dream of making a life here, which sparks a business idea to make it happen.

For many, that spark is doused almost as quickly as it glows. Some succeed by taking the easy path, launching a business that imitates what’s already working. Others slide comfortably into a humming ecosystem. A smaller number set out to create a new ecosystem.

Door County recently lost two women who were pioneers in the latter category. Joan Rusnack at Founder’s Square and Carol Overland at Wilkins and Olander didn’t sign up for a sure thing when they brought their big-city business skills north to open small retail shops in the place they fell in love with.

Richard and Joan Rusnack were drawn to Door County in the same way that many others were during the late 1960s.

“Like many, they were in awe of the natural beauty of the area, and simply drawn to it as an aspirational place of rest and relaxation,” said their son, Richard.

The Rusnacks had grown Hickory Farms stores into a chain of 33 locations across the Midwest, but that first trip to Door County grabbed their hearts. With a group of friends, they chipped in to buy the Thorpe Hotel and Cottages in 1968. With their friends the Ciesars, Domans and Herakovichs, they eventually developed the property into Founder’s Square, the center of shopping in northern Door County for decades to come.

The Rusnacks went on to create the Silly Goose General Store, which at its peak included four locations in Door County and a seasonal holiday shop in the Milwaukee area.

Joan Rusnack, who died Oct. 7 at age 83, did it all, her son said, serving as buyer, bookkeeper, merchandiser, clerk and custodian.

“She was our every-day inspiration, our daily reminder of the grit, determination and dedication it takes to do things the right way, every day,” he said.

Joan Rusnack was proud of developing a Door County business in a way that celebrated the best of the county while also preserving it.

“I think the way Fish Creek looks today, with its white buildings, covered decks and wood-chip walking paths is a proud testament to their legacy,” Richard said.

Rusnack stepped into a pivotal era in the evolution of northern Door County when it transformed into the destination it would be for the next half century. In Sturgeon Bay, another entrepreneurial risk taker stepped into a similarly pivotal moment for that city.

Third Avenue was a strip of aging, uninspired retail establishments during the early 1980s, recalled Dennis Statz of The Dancing Bear and White Lace Inn.

“When we got here in 1982, downtown was half vacant,” Statz said. “The stores that were running weren’t generating a lot of income.”

That began to change during the mid-1980s after the city designated it a historical area and made pedestrian improvements. By 1990, the street was showing signs of life. Terry Wulf had opened the Inn at Cedar Crossing. The Pudgy Seagull diner was thriving on the corner of Third and Louisiana. And in 1990, Carol Overland opened Wilkins and Olander, a boutique clothing store that would become a retail cornerstone for the city.

“She took a chance. It’s amazing what she did,” said Mark Schuster, co-owner of Bay Shore Outfitters. “She was a big part of downtown and the revitalization of Third Avenue.”

Overland died Aug. 8 at age 59. To Schuster, she was more than a business leader.

“Carol’s the reason I’m here in Door County,” he said, recalling the two years he worked for her. “I was working for Nautica and wanted to get back to Door County, and she figured out a position for me to come in. I learned a lot of this business from her.”

Overland earned a reputation as a go-getter early in her retail career, working as a buyer for Marshall Field’s. But she was drawn to the world of small business, not shopping malls. Her business motto sticks with Schuster today: “Buy light, buy right, buy often.” If you did that, you’d always have fresh products.

Her energy and passion for her business and for the possibilities of Sturgeon Bay were instrumental in the city’s transition from industrial community to tourism destination.

Overland was also involved with many charities and was a big supporter of Door CANcer and the Door County Humane Society, hosting fundraisers and supporting others.

For Rusnack in Fish Creek in 1968 and Overland in Sturgeon Bay 22 years later, Door County was far from a sure thing.

“It definitely took a lot of folks with a certain amount of craziness and optimism to open a place back then,” Statz said. But it’s the crazy and the optimistic who thrive in Door County and prove what’s possible.