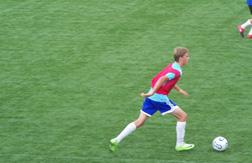 Sammy Johnson of Sister Bay has been named to the State 1993 Birth Year Team to represent Wisconsin in the Inaugural State Wars Indoor Soccer Tournament. The tournament will take place in Milwaukee this summer where he will be competing against state teams from around the country.

Johnson is a junior at Gibraltar High School where he plays for the Gibraltar/Sevastopol Varsity Soccer Team, and his club team, U17 United Soccer of Allouez, has been promoted to the Wisconsin State League Premier Division for the 2011 season where they will compete against the eight best U17 teams in the state.