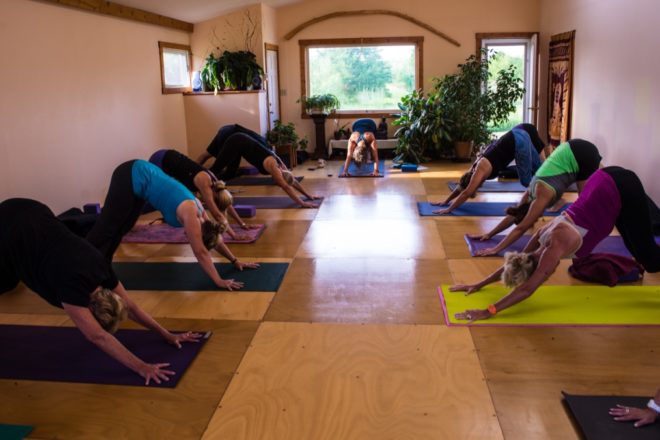 As Junction Center Yoga Studio in Jacksonport approaches nearly 20 years of helping attendees with their practice, the restorative yoga classes have struck a chord, particularly with older practitioners who use it to improve their daily movement and well-being. Offered twice a week, the gentle yoga classes have grown in popularity and benefited many dedicated participants. Restorative yoga is the gentlest form offered at the studio, and it appeals to a broad audience – newcomers and seasoned yogis alike.

I dropped in for a class to get a feel for what restorative yoga is, and I found a balanced blend of inner focus work – breathing and quieting the mind – and basic yoga movements that focus on alignment, flexibility and balance. Throughout the class, the primary intention is to stay present and practice one of yoga’s core principles: unifying the mind and body.

“It’s not yoga if you aren’t practicing mindfulness,” said owner and instructor Kathy Navis. “It’s so common to work on the physical self through lifting weights or stretching, but it is rare to really work on your mind. The mind can often be a source of more pain than in the physical sense.”

The movements in restorative yoga classes – if rated on a scale of zero to 10, with 10 being a maximum strenuous effort – rate around a three. That’s enough to push the body to a level where the practitioner feels an “interesting sensation,” as Navis described it. For me, this meant a gentle stretch or opening of a joint, but nothing that made me feel uncomfortable or strained.

Navis has been practicing yoga since the 1980s when she took her first class for a physical education credit at UW-Green Bay. She fell in love with the practice and took her first teacher training in 1995. After teaching at various locations, she purchased the building that is now the Junction Center Yoga Studio in 2000 and opened for her first classes in the fall of 2001.

One of her students at the restorative yoga class had practiced with Navis since those beginning years, and many others had been students for upwards of three years.

“I’ve learned so much from Kathy, especially in the beginner classes where she really explains the basics of yoga,” said Dolly Emerson, a frequent attendee. “I’m very grateful for all I’ve learned.”

Four men and eight women attended, which is a standard group size for most classes. Ages ranged from those in their 60s to those in their 80s. According to Navis, men have become more frequent practitioners at the studio after word got out that practicing members were seeing improved performance in their golf game.

But yoga goes well beyond benefiting golfers because it improves everyday mobility.

“Nobody here is trying to put their legs behind their heads,” Navis said. “They are working to improve or maintain those simple movements such as looking over your shoulder when driving or tying your shoes.”

And because of the typically older age of the participants, Navis is very familiar with ways to adapt her classes to make them accessible to all.

“There are many ankle and wrist issues, stiffness from surgery, or hip and knee replacements and shoulder issues,” she said. “Everyone has something. I say that if you are able to get to the ground and back up, even with some assistance, you can take the class.”

If you have no yoga knowledge or are concerned about being judged as a beginner, calm those worries.

“The ego really isn’t an issue with this class. Everyone just enjoys being here. There’s even some joking around, which isn’t something you can find a lot of places,” Navis said.

And there is no trace of competitiveness or focus on athletic prowess. It’s truly a relaxing and, well, restorative session that quietly allows the practitioner to tune in to the physical form and move toward better alignment and overall mental well-being.

“It’s shocking to me to see the see the changes over the weeks and months in my students,” Navis said. “Obviously, they see it, too. They are here to improve the simple things that help them live their life with grace.”

Yoga classes – from restorative yoga to level 1 and level 2 yoga – are offered year round except for a break in March. Drop-ins are welcomed, and class packages are available for purchase. Visit junctioncenteryoga.com to see a current schedule and more studio information.