It was around 40 years ago that Miss Emma Toft told me of an experience she had with a very young fawn at the Point near Baileys Harbor. She first heard a strange “bleating” cry coming from the woods near the house, and soon some crows were flying and calling near to where the sound was occurring. After some diligent searching she found the newly born fawn being harassed by the mob of crows. 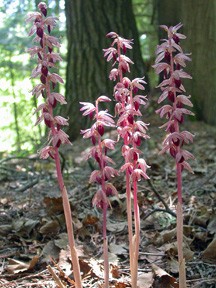 This is proving to be a very good year for blossoming Striped Coralroot Orchids.

Charlotte and I had a similar experience in the first week of June several years ago while leading a group of visiting naturalists through Whitefish Dunes State Park. Suddenly an unusual sound reached our ears, somewhat like a lost boy calling for is dad. Over and over it cried, “DAAaad, DAAaad, DAAaadY.” Suddenly it dawned on us – a White-tailed Deer fawn was crying for its mother, the exact sound that Emma Toft had described to me. Finally we had experienced that very human-like call.

Quite a few people have mentioned to us what they feel is a huge decrease in the number of deer in our area. We on the other hand have found ourselves being extra careful when driving within several miles of our home, to avoid a deer-car collision. Some of the deer have been yearlings that have been “kicked” out of their home with mother, now that the new fawn has been born.

June is the month when wild members of the iris family take “front and center.” Blue flags, usually the wild irises of wet habitats, will bloom around the time your garden irises also reach their peak, which is somewhat later this year due to the continued cold. There is another very small but fascinating member of the lily family that is in flower right now, the Blue-eyed Grass. It’s not a grass at all, but simply looks like one with its very thin and flat stem. Perhaps one could compare it to a miniature iris.

The path I mow around the perimeter of our five-acre field about twice a summer, for walking now and cross-country skiing in winter, has dozens of these six-inch plants. Their thin, flat stems and six “tepals” (petals and sepals that look alike) hint of their being members of this beautiful group of flowers. 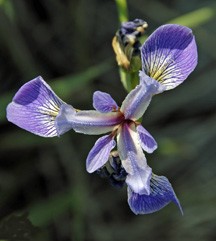 The flower of the Blue Flag Iris is more slender and delicate than the garden variety.

A few days ago we had a good look at a Broad-winged Hawk at our shallow birdbath on the ground. It barely fit, but managed to wet its feathers nicely. We’ve also had fairly regular looks at Cooper’s Hawks in the front yard. I think they’ve nested in our woods for several years.

One time we enjoyed watching what we called a second-year Cooper’s Hawk unsuccessfully try to get either a squirrel or bird, usually a Blue Jay, in the front yard. This Cooper’s Hawk had a lot to learn about capturing its own prey, and was missing a lot more than it was catching. As a matter of fact, we didn’t see it catch a single creature.

One of our favorite wild native orchids, the Striped Coralroot is now in full bloom. Unlike most of the 35 or so other species of orchids that grow in Door County, this one is a saprophyte, along with its close relatives the Spotted Coralroot and Early Coralroot. The Striped Coralroot contains no chlorophyll whatsoever and instead is salmon-pink with fine reddish stripes on its petals and sepals. We look for them, sometimes growing in dense clusters of a few dozen or more plants, along sunny openings in primarily evergreen woods.

Every summer around the last week of June we expect the first appearance of baby squirrels in our front yard. Every so often, when we thought there would be so many young squirrels here simply because of the high number of adults, there were none. It happened the same year that we had so many hawk sightings in this area, including Northern Goshawks. Finally we learned from our hawk expert, Tom Erdman, about the Goshawks’ fondness for baby squirrels. It most likely boils down to the fact that young, inexperienced squirrels are easy prey for these raptors to catch.

One of our favorite wild fruiting plants, the Thimbleberry, most often is in bloom during the last week of June along the lakeside of the central and northern parts of the county. Our supply of Thimbleberry jam is down to zero now so we’re hoping for a good crop of the delectable but, tart berries come early August. Emma Toft called it the berry with the pine flavor. We call it pure ambrosia! Bear in mind that it is not legal to pick any wild fruits or nuts in Wisconsin State Natural Areas, such as the Toft Point State Natural Area.

Speaking about wild berry plants, it was on June 28 several years ago that we watched the Indigo Buntings bringing nesting materials to the nest they were building in our raspberry patch. For two years in a row they raised their young in practically the identical place. How secretive, like little ghosts, they would come and go. When it came time to prune the old canes out of the patch at the end of the growing season, I collected the nest, still beautifully fastened to two canes, for our friends to admire.

Many songbirds have ended their courtship and territorial singing for the summer. However, there is one exception – the Indigo Buntings who continue to sing throughout much of summer, as though they thoroughly enjoy doing so. Look for them, for example, at the very tip of a Sugar Maple tree. Remember that these colorful buntings have no blue pigment in their feathers. What you’ re seeing is reflected light only appearing to be blue due to prismatic light principles. If the Indigo Bunting you are looking at is between you and the sun, then it will appear to be dark gray or black.

There have been a number of county reports of people seeing Dickcissels. Hay fields, pastures, weedy fallow fields, weedy margins of ditches and roadsides tend to be their most frequently used habitats. Ornithologists in Door County estimate that close to 70 percent of the food eaten by Dickcissels are insects considered harmful to agriculture, while only around seven percent of their food is thought to be injurious to agriculture. Close to 25 percent of their food is neutral, which makes the Dickcissel as a valuable species.

Go in search of the Dickcissel to enjoy its unusual beauty and its wonderfully descriptive song. You’ll be glad you did.