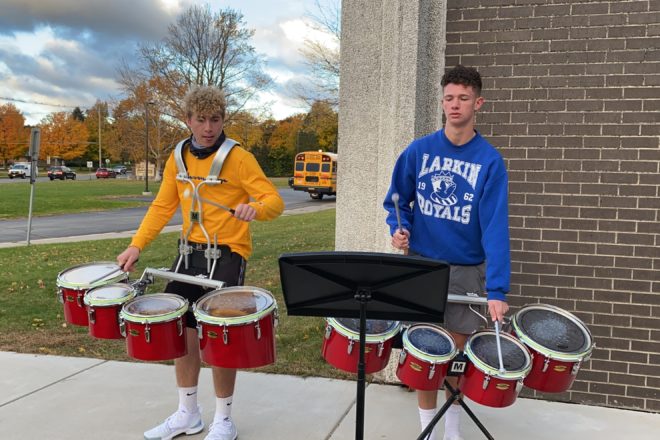 (From left) Drumline members Landen Hintz and Spencer Hubbard and other Sturgeon Bay High School band members practiced outside as much as possible this year as a COVID-19-prevention precaution. Now that the musicians are inside, they have many more protocols to follow. Submitted.

Instead, students are separated by much more than six feet within the music room, and many band students are studying and practicing from home. Because neither band members nor fans can attend basketball games, students are recording music for use at sporting events.

And although the Dec. 7 holiday concert was canceled, the music program’s pieces were posted on the district’s website over Christmas for a week, limited by copyright law that prevents long-term posting of many of the songs. Hintz also posts whatever she can on Facebook, and she plans to send recordings to parents of what the students have been doing.

“The music department has also found ways for the kids to shine, as the usual and popular concerts can’t happen as they normally would,” said Dan Tjernagel, Sturgeon Bay school superintendent.

The brass and woodwind sections must deal with extra restrictions and precautions to limit droplets from breath becoming airborne.

Senior clarinetist Abrielle Lenius said she thinks the band members’ musical abilities have increased because they have to be more precise and better prepared than before, and they have to listen more to each other.

“We’re all so spaced apart,” Lenius said. “You’re just really exposed, and you can hear everything more clearly than we normally would have.”

“We’re missing out on a lot,” she said. “We did not have to do a field show this year or any of the pep bands for football and basketball games.”

The band director and colleagues sewed bell covers to limit the breath plume emitted from wind instruments. They also made “playing masks” with a hole for the mouthpiece and a flap around that, to be closed when the musician plays.

“We’re following the recommendations from the Colorado study on aerosol in music performance,” Hintz said.

Remote learners play along during practice and participate online during class. A recent class for the wind ensemble, Sturgeon Bay High’s top performance group, had 14 in-class learners and nine participating from home.

Elena LeRoy, a senior, said the distancing, masks and bell covers have been challenging.

“But that makes us … work harder and better as musicians to hear everyone around us and to make sure we’re counting correctly,” she said.

Remote learners have discovered that timing is more important than ever. Senior clarinet player Lucy Hanson uses scratch tracks and a metronome to record songs that can be layered with the pieces recorded at the school. The students in the classroom can’t hear the virtual learners’ notes, but the musicians at home can hear bandmates via earbuds.

“We have a camera and recorder at the front of the room, and then we’ll play a song,” Hintz said. “To get the virtual students involved, we’ve been playing on our own and recording our own sets where we play three different parts and layer them on top of each other. I combine all the different tracks together so it sounds like we’re playing together, even though we’re separated.”

Arry VanLieshout, a junior who plays trombone and tuba, has experienced Music 2020 in the classroom and from home. She said virtual learning has improved her solo performances and her knowledge of GarageBand software.

“It makes it easy to layer your parts on top of each other,” she said. “You’ll be able to record one and add another layer to it. And eventually you have an entire ensemble of yourself.”

The music staff has ordered more Mac-platform software and tools to help them assemble individually recorded pieces into virtual concerts.

“It’s very different from anything we’ve ever done before,” Hintz said. “Our learning curve is quite great, for teaching and students.”

In the Sturgeon Bay schools, Hintz said, the middle school students are learning to play instruments that don’t require deep breaths and wind.

“Many are learning piano on little keyboards they have, and also guitar and bucket drums and pitched bottles,” Hintz said.

She said the kids have shown tenacity through these challenges. Many years, the wind ensemble has successfully auditioned to play at Disney World, but that definitely won’t happen in 2021.

“We’re hoping to have our trip to Disney in 2022, depending on how the pandemic shakes out,” Hintz said.