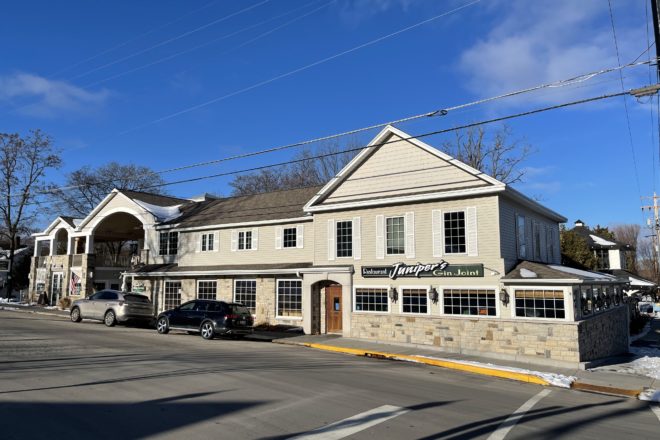 The new owner of Juniper’s Restaurant said he will alter the corner of the building to make it more inviting. Photo by Myles Dannhausen Jr.

One of Door County’s marquee locations has a new owner. Juniper’s Restaurant in Fish Creek, at the intersection of Spruce Street, Main Street and Highway 42, has sold for $1.8 million to Amos Goaz, an entrepreneur who owns two other retail stores in the downtown Fish Creek area.

Goaz said he will make some noticeable changes to the building to take advantage of its location and diversify the businesses in the space. He plans to put a clothing and home décor store on the first-floor corner on Highway 42, installing larger windows to draw attention.

“The building now doesn’t invite you in,” Goaz said. “I want to make it invite people in. I have been looking for a good location on Main Street for a clothing store.”

Goaz plans to update the restaurant menu and add a coffee and ice cream shop to the building as well. For decades, the building was home to the C&C Supper Club until Bob and Noreen Pollman, owners of Door Peninsula Winery and Shipwrecked, bought it in 2008.

Goaz said he previously operated a business in Lake Geneva for 14 years before opening shops in Fish Creek. He anticipates opening sometime in May.