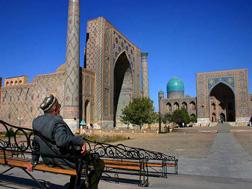 The Kiwanis Club kicks off its 2010-2011 Travelogue season on Friday, September 17 with the presentation of its first of six new travel films. The first film, The Silk Road, takes viewers on a journey along the ancient Silk Road as presented by Marlin Darrah, one of the most experienced and widely traveled filmmakers in America. He is also the award winning executive director and cinematographer of the renowned production company, International Film & Video.

The Silk Road features such places as Istanbul, Samarkand, Xi’an, Kashgar, Buhkara, Bishkek, and Khiva. The program not only features the stunning blue-tile domed architecture of the ancient Silk Road towns, but also the great handicrafts, the wildly colorful clothing and unique traders at some of the greatest open markets in Asia. It’s a journey to a part of the world rarely seen – one that continues to inspire imagination.

Show time is 7:30 pm at the First Baptist Church of Sister Bay. Admission is $7 or $36 for a six-ticket season pass that is valid for admission to any of the season’s remaining travel films. Tickets may be purchased at the door. Children under 18 years of age are admitted free; refreshments will be available during intermission. For more information, call Gary at 920.854.4825.