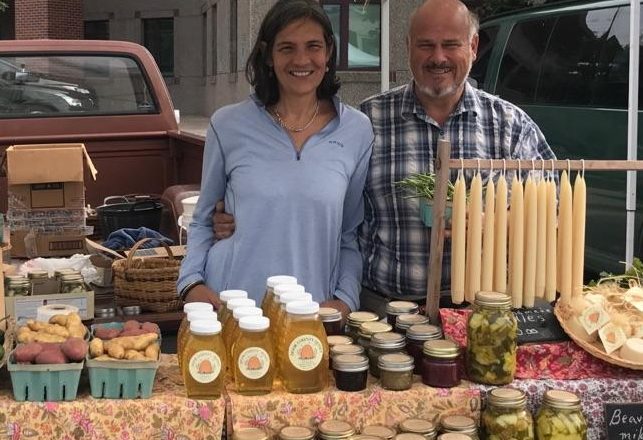 Now in its 13th season, Big Dog Farm has come far from where it started. In fact, when they began their garden in Sturgeon Bay, Randall and Lisa Manges never intended to sell any produce.

Now in its 13th season, Big Dog Farm has come far from where it started. In fact, when they began their garden in Sturgeon Bay, Randall and Lisa Manges never intended to sell any produce. But fast-forward to today, and you’ll find that the farm has grown from one garden to four; it stocks a farm stand at three weekly farmers’ markets; and it gives Randall enough work to keep him busy from 4:30 am until dark most days.

“When we first moved here, my youngest son said that now that we live in Wisconsin on a farm, we needed to get a truck,” said Randall Manges, who grew up in Pennsylvania. So he and his son made a deal: If his son worked in the garden all season, they could sell what they grew and use the profits to buy a truck. “That was all the motivation he needed. He worked himself into a white lather,” Manges said.

They made $1,400 that first season and soon found a brown, 1983 Chevy pickup that fit the bill for the perfect farm truck.

The next year, they continued selling at markets, and every year since, they’ve grown the operation in new ways.

This past week marked the first anniversary of Big Dog Farm’s new hoop house, which allows the family to extend the season and keep growing certain greens throughout the winter.

“It’s like my playground,” Manges said. “I am always learning and experimenting. They say it takes three years to get to know a plot of land, and I agree. Now this hoop house has added all new growing conditions to experiment with.”

Manges’ parents grew everything they ate, which is how he learned to garden and preserve. A professional musician by trade, he and Lisa lived around the country before discovering that Door County was drawing them in.

“We first visited friends in Egg Harbor once each summer, then twice, then three times a year,” he said. “Then we started looking [for property].”

They were looking for something that would allow them to have a substantial garden, and the property in north Sturgeon Bay checked all the boxes. With enough acreage for growing, landscaping and raising some animals, Big Dog Farm is a peaceful, beautiful, green haven.

The family grows its produce organically and naturally, which can take extra patience.

“I just plan on raising some for them [the bugs] and some for us,” Manges said.

The farm is also home to three varieties of laying hens, two pet goats and five bee hives. In the nearby hardwoods, the family is adding growing mushrooms – shiitake and oyster – to its list of endeavors.

Each year is a little different, and the changing weather patterns often produce new challenges. Manges is happy to report, though, that he’s not alone in navigating these conditions.

“Since coming here,” he said, “the area growers have been so gracious – Sully’s and Pat’s Patch. We get together and work together. It’s easy to share ideas.”