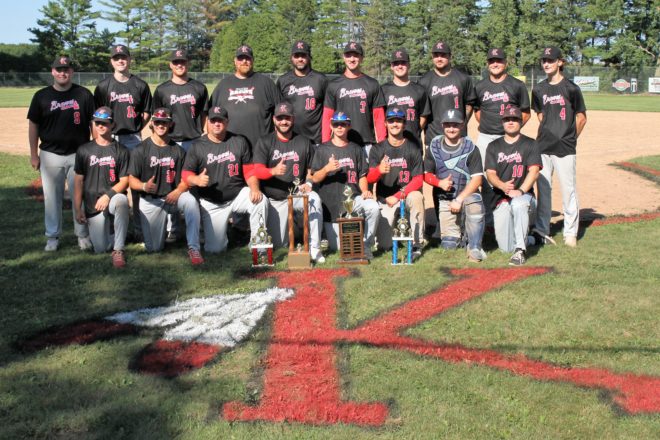 The Kolberg Braves claimed the regular season and playoff championship. It was their first championship since 2010. Photo by Deanna Reinhardt.

From the opening pitch to the last, it was a Kolberg summer. Powered by the season-long dominance of pitcher Trevor Reinhardt and a hot-hitting lineup, the Braves rolled through the regular season to claim the Door County League’s main championship, then double-dipped by holding on to beat Washington Island in the playoff championship, 10-9.

The Kolberg ballpark was packed with nearly 500 fans who came to see if the Islanders could pull off the upset. They almost did it, mounting a ninth-inning comeback to score five runs and finish two runs short of the title.

The regular season title is Kolberg’s first since 2010, when the Braves finished a dominant run of 4 championships in 5 years. They went on to win three straight playoff titles from 2012-2014, but hadn’t celebrated either championship since.

Reinhardt was voted the League’s Pitcher of the Year, and also finished fifth in batting on the season. Egg Harbor’s Cory Fuller earned the top hitter award with a .485 average. Eric Bley of West Jacksonport was named Manager of the Year.

In addition to awards earned, the Door County Baseball League held a special presentation to honor Eddy Allen, the owner of WDOR radio who announced league games from a seat by the fence for over 50 years. His passion and dedication to the League were recognized with a trophy, an All Star baseball cap and a standing ovation from the crowd in Kolberg.