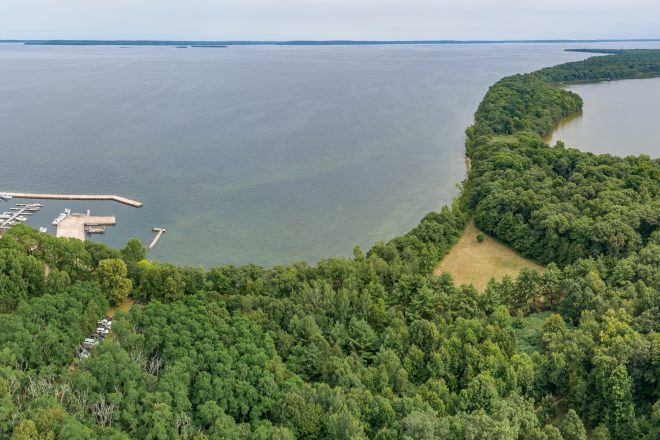 For years, there was no guarantee of protection from development, and all of the forest was private property on Chambers Island, a 3,200-acre island that sits about seven miles off the coast of Fish Creek.

But over the years, Door County Land Trust has acquired and preserved land on this island in the waters of Green Bay where migratory birds rest and an impressive diversity of tree species thrives, including older, second-growth forests.

This week, the Land Trust announced that it has added another protected parcel to the Chambers Island Nature Preserve, now totaling more than 800 acres. The new property contains a mature upland forest with red oak and butternut, plus an open meadow, and it’s the first of the Land Trust’s parcels that contain shoreline on Green Bay.

Longtime Chambers Island lighthouse keeper and tour guide Mary Ann Blahnik said she’s pleased the Land Trust has been acquiring and preserving public land on an island. She said some local property owners and seasonal visitors want to see at least 1,000 acres protected – a big step for an island where most of the property is private and visitors have access mainly to the marina, air strip, two roads and the lighthouse on Saturdays during warm months.

The Land Trust began its partnership with the Chambers Island community to create the nature preserve in 2014 to protect the interior forests and island wetlands. The initial group of islanders rallied fellow landowners around that vision and raised private funds for initial protection and long-term care of the property.

But the island could have taken a very different direction. During the 1920s, investors wanted to clear-cut much of the island to establish an 18-hole golf course and clubhouse surrounded by luxury homes. The Chambers Island Association built a temporary course and an airstrip that still exists, with the idea of selling lots to raise funds for a course covering the southern third of the island.

Literature that the developers created at the time, discovered by Ephraim Historical Foundation curator Cody Schreck, described an 18-hole course to be constructed in a 400-acre Country Club District.

“Golfing by the waters of Green Bay and the ozone of the balmy pines cannot fail to be exceptionally stimulating,” the promotional literature read.

Instead, more of the island’s land, forest and biodiversity will be protected forever.

The Chambers Island Nature Preserve is the largest of the Land Trust’s nature preserves. The forest provides important habitat for native invertebrates and plants. Thirty-six butterfly species have been recorded on Chambers Island so far, including the threatened Tawny Crescent (Phyciodes batesii). The island is also home to large numbers of rhinoceros beetles, which the Wisconsin Department of Natural Resources have designated as being of “special concern,” according to the Land Trust’s announcement this week. To date, more than 350 plant species have also been documented on the island.

The newly protected property was formerly known as the “prayer maze” when the Green Bay Catholic Diocese’s Holy Name Retreat Center owned it. Its proximity to the marina means it could be the future home of a kiosk and educational signage. In 2018, it was home to the Chambers Island BioBlitz, a research-filled week that drew both experts and citizen scientists.

Blahnik said she would love to see that signage go up soon. Many island visitors have access to the internet and global-positioning maps, so they have an idea of where the protected lands are located. Still, she said the signage would serve visitors much better.