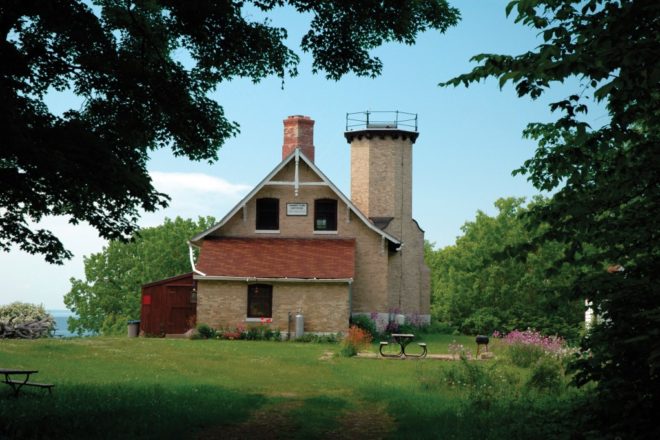 The Blahniks have maintained the Chambers Island Lighthouse for 45 years

Mary Ann Blahnik remembers the day her husband, Joel, pitched the idea of becoming caretakers of the Chambers Island Lighthouse.

“I wasn’t thrilled,” she said without hesitation. But at the same time, she understood why the Town of Gibraltar’s ad for volunteer lighthouse caretakers caught Joel’s attention.

“It was the opportunity he had been waiting for,” she said.

It was 1976, and the town had recently acquired the property from the U.S. government. But Joel’s interest in the lighthouse stemmed back to the 1950s, when he narrated a bus tour of the island for visitors on the Ephraim excursion boat. Over the years, he researched the lighthouse to add more material to the tour’s narrative and, in turn, his affection for the property grew.

At the time, the Blahniks still lived and worked in the Milwaukee area – Joel as a teacher and Mary Ann at a library – but their summers were spent at their Fish Creek home. Reluctantly, Mary Ann agreed to answer the ad, and a 45-year chapter as lighthouse caretakers began.

“But [the kids] were never at a loss for things to do,” Blahnik said. “And I think that was one of the biggest benefits of our time on the island. It really taught them – all of us – to be resourceful.”

Lessons in resourcefulness varied, with some less successful than others, such as Blahnik’s attempt at the back-to-the-land movement that swept the country in the 1970s.

“I tried teaching myself to identify edible plants,” she said. “We only got as far as milkweed blossoms,” which, as one might guess, were not popular with her children.

Cooking in general could be interesting when staying at the lighthouse.

“If you forgot an ingredient for a recipe, you made something else,” she said. “With just about everything, you learned to make do with what you had.”

Like the time when the family was invited to a birthday party for the daughter of another islander. With no general store, the family made gifts.

“Joel’s brother took his chainsaw and a log and made a little kid’s chair,” Blahnik said. “We had the old-fashioned wooden clothespins and made her a doll.”

In some ways, the lack of amenities – and at times people – is what helped the island to woo Blahnik over the years and win her over.

“I think that’s still why I love being out there – especially the weekends when I’m there alone – because things come up and you have to rely on yourself,” she said.

She recalled the time she was staying at the lighthouse alone and needed to move an old concrete slab step, previously used for the old back shed, across the lawn to replace the step at the outhouse.

“I found two old broom handles, pried up each end and rolled it,” she said. “Still, everytime I step up into the outhouse, I think, ‘I did that.’”

Today Blahnik has a little more help. In 2020, Leon and Sharon Zellner came on board as additional volunteer caretakers, lending Blahnik a hand, both when she is and isn’t on the island.

A typical weekend for caretakers involves mowing the lawn – something Blahnik notes is much easier to do today than 45 years ago, thanks to riding lawn mowers – and a variety of projects, from painting to cleaning, to small repairs, to sharing the lighthouse’s history with the smattering of curious tourists who make their way to the remote island for a visit.

Blahnik ensures every visitor that the building and property are “maintained,” not “restored.”

“You could never restore it historically if you’re going to be living in it,” she said.

Over the years, updated amenities have included a cistern to pump water to the kitchen, propane-operated appliances and a small solar panel that operates an electric pump for a conventional toilet.

Although Joel is no longer able to visit the lighthouse as frequently, Mary Ann continues to make the trip almost every weekend, relying on the generosity of islanders for transportation to and from the island, as she has for most of her time as a caretaker.

Blahnik will be on the island June 11, 12 and 13 to welcome visitors as part of the Door County Lighthouse Festival. Although the lighthouse is open for tours on weekends throughout the summer, the festival provides one of the rare opportunities to visit with transportation provided.

These are the interactions Blahnik looks forward to the most, evident by the sparkle in her eyes when she talks about past visits from ancestors of former lighthouse keepers and the anticipation of whom she might run into next.

“It’s sort of funny,” she said. “I went from a reluctant islander to an enthusiastic one who doesn’t seem to know when to let go.”

The Chambers Island Lighthouse is one of 11 featured in the Door County Lighthouse Festival this weekend. Tickets are available at doorcountytickets.com.