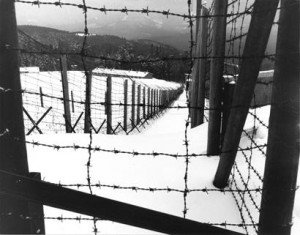 Just here, looking through parallel rows of barbed wire,
you would have seen mountains, softened by a sudden spring snow.
Unless you turned, you could not see the gallows,
where the defiant ones were hanged, nor
the gas chamber where Bayer’s Zyklon B turned prisoners
to corpses for dissection and experimentation.
Neither could you see the oven, though
you could not escape its stench, nor the greasy ash which tarnished
camp and countryside. Behind you, too,
were neat rows of barracks, each containing
rough wooden bunks where filthy, starving, vermin-infested
men and women tried to sleep. And the yards,
where prisoners stood, coatless
under snows like this, for endless roll calls.
I have not forgotten you, Sister, Brother, Mother,
standing here in seasons past, seeing distant trees, green grass,
small birds which might gave been singing.

*Le Struthof was the only concentration camp in France.