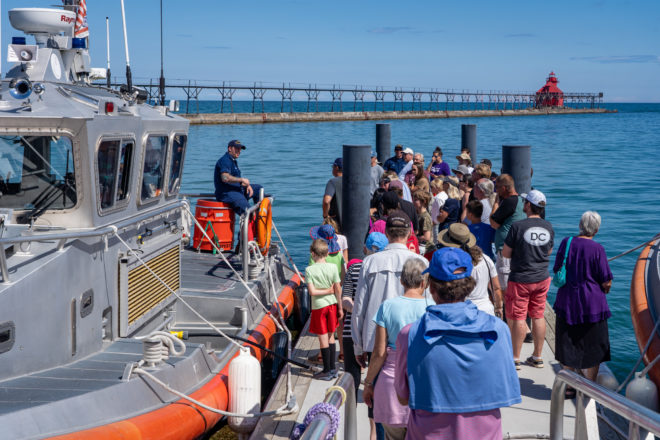 U.S. Coast Guard personnel gave tours of the station and lighthouse at the east end of the Sturgeon Bay ship canal. Photo by Rachel Lukas.

Door County’s eight libraries changed course slightly from the one that other public libraries nationwide are following when local librarians remapped their summer reading program to take advantage of one of the peninsula’s greatest assets.

“The national theme is Oceans of Possibilities,” said Beth Lokken, a youth services librarian based in Sturgeon Bay. “What I decided is we didn’t need saltwater to make this a wonderful thing for the kids. We could do ‘The Inland Seas.’”

As part of that program, the Sturgeon Bay library received permission for students and parents to tour the Coast Guard station and lighthouse at the east end of the Sturgeon Bay ship canal on July 12.

Also, the libraries hosted Kevin Osgood, Green Bay Coast Guard auxiliary flotilla commander, as he provided water-safety lessons and tips. By day, Osgood serves as director of the Door County Maritime Museums, including the main building and tower in Sturgeon Bay, the smaller museum in Gills Rock, and the Cana Island Lighthouse.

The museum and public-library headquarters also started a collaboration last year, which has continued this year, to provide more young people and their families with free visits to the maritime museums.

“The Library Foundation did purchase passes to the Maritime Museum that are available for checkout with your library card at all eight branches of the library,” Lokken said. “Each one of those passes is good for two adults and their children. If you had parents, and they have five kids, the parents and all five kids could go. It checks out for five days, and there are several different places you could go.”

Osgood said the library/museum temporary membership was popular last summer and this year.

“They get to come in and enjoy a local museum without paying that admission,” Osgood said. Plus, the museum provides discounts in the gift shop to families or students who check out those temporary membership cards.

Lokken said she has inland seas–themed displays set up at the Sturgeon Bay library, and she encourages people to borrow books and materials from those tables. She does not, however, tell people what to read.

“I’m not actually pro-booklist,” she said. “I’m happy to give suggestions, and we have suggestion lists on the website. But the idea of telling a kid ‘you must’ is counter to what I want to accomplish in the summertime. Then it’s like a job. This is supposed to be fun. Read what you love. Enjoy things.”

Lokken has not planned the August programming, but some of it will deal with shipwrecks. She said she invited scuba diver Jason Albertson from the Sturgeon Bay Police Department to talk to participants about diving opportunities, equipment and the depth and locations of some of the shipwrecks around the county.

Anne Moser from Wisconsin Sea Grant and the Wisconsin Water Library in Madison will also give presentations about shipwrecks at the Forestville library on Wednesday, Aug. 17 (the time will be announced), and for the Ephraim Historical Foundation on Aug. 16, 10:30 am.