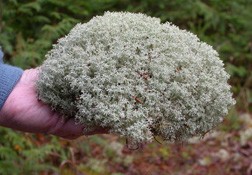 The Reindeer Moss is actually a lichen. One closely-related species in the far north is heavily eaten by reindeer in winter. Photo by Roy Lukes.

It wasn’t until I started working at The Ridges 47 years ago that I began to take a liking to lichens. A day didn’t pass that someone hiking with our tour group didn’t ask about these mysterious and little-understood plants. A frequently asked question was, “Aren’t all those crusty grayish ‘things’ growing on so many of the trees killing them? There aren’t any in the city where we live, and the trees appear so healthy.”

I nearly had to bite my tongue in informing them that, those “things” are lichens, and they do so well here because the air is clean. They get everything they need for growing from the air. Lichens don’t do well in many large industrial cities because of the relatively bad air quality there.

Oh yes, some lichens are disappearing from Door County too, such as the Old Man’s Beard Lichen, in the genus Usnea (US-nee-a). When I first came to the county I could drive along the road, near Cana Island, and marvel at the number of long, draping clusters of Old Man’s Beard adorning the large spruce trees. Along with these highly pollution-intolerant lichens was perhaps the highest number of nesting Parula Warblers in northeastern Wisconsin. These birds prefer to build their nests in the hanging clusters of these lichens. Today a large portion of these lichens, and many of the nesting Parula Warblers, are gone from much of the county.

Don’t confuse the Old Man’s Beard Lichen with the Old Man’s Beard, also called the Spanish Moss, of the South where it produces long draping clusters on many trees. The Spanish Moss is a seed producing plant in the pineapple family. Interestingly its scientific name is Tillandsia usneoides (us-nee-o-EYE-dees). Its species name, usneoides, means “like the Usnea Lichen.” Lichens reproduce by spores.

It was Dr. John Thomson, world famous lichenologist and plant taxonomist from UW – Madison, who did several lichen workshops and evening programs dealing with lichens when I managed The Ridges. He left a lasting impression of the beauty and value of lichens to many ecosystems. How well I remember and cherish the first hike we had together. He had arrived at 4 pm on the afternoon of his first program and suggested we hike the rangelight trail before supper.

We hadn’t gone more than 100 feet when he exclaimed, “Oh my gosh, I had no idea that so much Cetraria arenaria [Iceland Moss Lichen] grew here!” 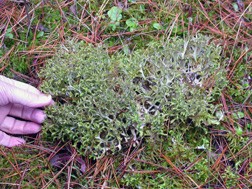 In retrospect I still can visualize his look when I said, “Could you please explain yourself?” as though he may have been thinking to himself – “I’m shocked that Roy doesn’t know this rare lichen!”

Indeed, this is one of the few places in the entire state where this unusual plant survives. NO, I didn’t know it at the time!

Some years later I was leading a large tour group of rock garden aficionados from their international convention being held in Milwaukee. Two of the people, man and wife, were from Iceland, and I immediately thought of learning more about the Iceland Moss Lichen from them. We were having a wonderful hike when I reached down, picked up a fine cluster of the Iceland Moss Lichen and asked the lady from Iceland if she knew the plant. Her reply was, “Oh yes, we eat that plant!” She and her people had been using the plant for many years primarily as a soup thickener and for added nourishment, and as a special traditional dessert. She was quick to add, “But not everybody likes it!”

By the way, many lichens contain usnic acid, which for some people can cause a severe rash. In our region that rash at one time was called “woodcutter’s eczema” or “cedar poisoning.”

I talked years ago with Ferdinand Jorns, great stone mason from Baileys Harbor, who told me that in the past the loggers in this area often rolled the cuffs of their trousers up so they wouldn’t get so soaked when making cedar posts in the wet swamp. It was common to bruise their shins during their work, and the usnic acid would enter their skin, resulting in the terrible cedar poisoning that lasted for weeks.

One of the most gorgeous, big and splashy lichens I know of in Door County, usually growing on rocks near the shore, is the Elegant Lichen, Xanthoria elegans (zan-THOR-e-a EL-e-gans). I first saw it on my back-packing trip to Isle Royale National Park in northern Lake Superior in July of 1958. As the boat approached the island we could see what appeared to be a continuous bright orange stripe painted on the rock several feet above the water around nearly the entire island. It turned out to be the Elegant Lichen. 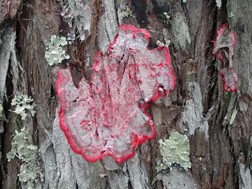 This Christmas Lichen was photographed at the Corkscrew Swamp southeast of Ft. Myers, FL. Photo by Roy Lukes.

Several of the most well-known and admired lichens here are the British Red Soldier, Pixie Cup, and Reindeer ‘Moss.’ All are fruiticose lichens and can stand upright on rotting wood or cool damp soil for an inch or more. Another abundant crustose lichen that grows only on limestone, appearing like dull black paint, is Verrucaria nigrescens, (vare-ru-CARE-e-a ny-GRESS-ens) which like so many lichens has no common name. Call it the Black Limestone Lichen or whatever strikes your fancy.

One of the most colorful lichens Charlotte and I have ever seen was growing on a Bald Cypress tree at the famous Corkscrew Swamp Refuge southeast of Fort Myers, Fla. One look at it and you will come up with its most common name, the Christmas Lichen.

Undoubtedly the general disinterest of most people to lichens accounts for the almost total lack of good lichen field guides on the market today. Two I use a lot are Michigan Lichens by Julie Jones Medlin, and Lichens of the North Woods by Joe Walewski. Another large expensive book I use a great deal in my amateur study of biodiversity, preserving the environment, and photography and identification of lichens is Lichens of North America, published by the Yale University Press. This is an awesome book!

Now, with the nearly 9.5 inches of rain we’ve had since early September, and in that lichens are at their very best in late fall, I recommend you become a lichen “sniffer.”

When you’re out hiking with a group and all of them are behind you, find a good growth of lichens near the base of an old weathered stone fence, in a cool, sandy, mossy opening in shore-land woods, or even along the upper stretches of a rocky shore. Get down on all fours and bring your nose close to the lichens. No, the lichens have no odor, but you will have placed your feasting eyes close to the beautiful and fascinating world of lichens. The unobservant crowd behind you chuckles, totally missing what you are enjoying – while you “smile” back at those snickering and watching you!