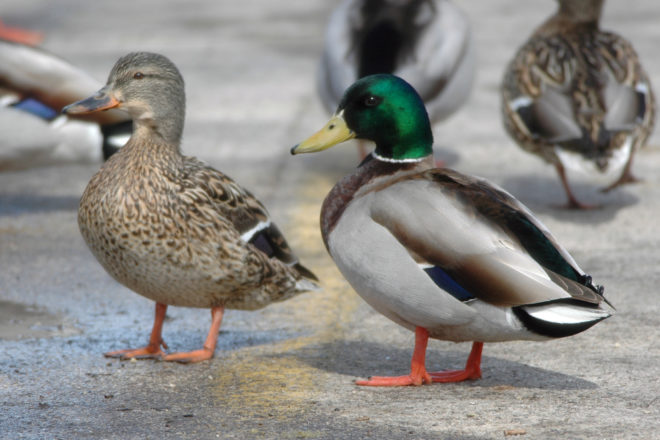 (From left) A female and male mallard stand as part of the flock at Bay Beach Wildlife Sanctuary in Green Bay. Photo by Roy Lukes.

Which duck would you say is the most common – and perhaps the first one you learned to identify as a youngster? I remember, as a child, our family trips to the Milwaukee lakefront to see the wildlife (the birds, not the people), and the mallards were the most numerous of any waterfowl there.

At the Bay Beach Wildlife Sanctuary in Green Bay, there’s an open-water lagoon where you can feed the ducks and geese. There, too, the mallards are often the most numerous duck in the flocks.

Mallards are common throughout the world, and many species are mallard hybrids. They belong to the group known as dabblers, which search for their food in the shallow waters of lagoons, marshes and lake shorelines. They do not dive below the surface unless they’re in danger of attack from a predator.

The north temperate part of the world is their home: throughout North America and in Iceland, Europe, Asia and North Africa. They breed in most regions as long as they can find small lakes, sloughs, ponds, creeks and quiet rivers.

They’ve been introduced to Australia, New Zealand, Brazil, Peru, Argentina, Chili, Uruguay, Colombia, the Falkland Islands and South Africa. Mallards are quite adaptable and are considered invasive species in some of these countries. They can interbreed with native ducks and produce viable hybrids that may continue to weaken the native species’ genetics, perhaps causing some of those natives to become extinct.

The wild mallard is the ancestor of most domestic ducks. Perhaps one reason for its success is that it can survive on a great variety of foods. Aquatic plants such as sedges, wild celery, smartweeds, duckweeds, pondweeds and wild rice are among its favorites; and acorns, beechnuts, grain, corn and the seeds of many plants are among its choices of upland food.

Although most of a mallard’s food is vegetable in nature, it does also consume various types of animals, such as small fish, tadpoles, snails, leeches, angleworms, frogs, mice and toads. A great favorite in the summer is mosquito larvae. It’s claimed that these ducks are far better mosquito controllers than many fish species.

Mallards are statewide breeders in Wisconsin and are present in all seasons. Many do migrate south, but given enough food and open water during the winter, they soon prove their unusual hardiness.

The average drake mallard is about 26 inches from the tip of its beak to the sporty, curled tip of its tail. It has a wingspan of 36 inches. Its iridescent, green head; narrow, white collar; and reddish-brown breast present a handsome picture. A good field mark on a mallard is the violet-blue wing patch, called a speculum, that’s edged by a white border both in front and behind.

American black ducks have violet wing patches too, but without the white border. This is so obvious that, with a little practice, you can even see the mallard’s white-bordered wing patch while the bird is in flight.

The hen’s brown and beige plumage is mottled and streaked throughout, giving her colors that can blend with her nesting site’s vegetation. The speculum in each of her wings is the same as on the male, but she lacks the curled tail tip.

The female lays an egg every other day until a clutch of eight to 12 is set in the nest, which can be on the ground or as high as 30 feet in a tree hollow. Incubation takes about four weeks; the fledglings can fly when they’re about eight weeks old.

Mallards experience two molts each year. They undergo a complete molt – losing all their feathers – during the late summer to early fall, but fortunately, not all at the same time. A partial molt occurs in early to mid-summer, when only the body feathers, not the wing feathers, are dropped. This plumage is called an eclipse plumage, and it lasts for about a month. During this time, drakes look like hens, but the female appearance remains the same all year.

The dabbling ducks include the mallard, American black duck, northern pintail, northern shoveler, wood duck, blue-winged teal and green-winged teal, to name a few. Other ducks, called bay ducks, can dive deeply in the big lakes. They include the redhead, canvasback, ring-necked and scaups, plus the heavier goldeneyes, buffleheads and scoters.

One memorable, early-April trip many years ago was to Plainfield, Wisconsin, to witness the dawn courtship dance of the greater prairie chicken. We had to drive to our blind in total darkness along gravel roads that were flooded with spring rains. Our leader told us to observe any ducks in the road ponds. She said if they were dabbling ducks, the water level was to drive through. However, if they were diving ducks – capable of diving deeply – we should turn around and take another route!